Sorcery of Thorns by Margaret Rogerson 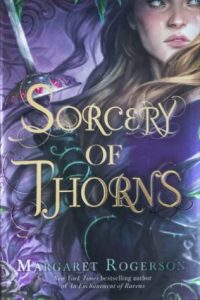 Review: I had been chopping at the bit to get a chance to read this book, and of course when I did have a copy of it-an early one too. I didn’t. Then I got it in my OwlCrate book box, and it wasn’t till one of my close friends basically yelled at me to read it that I got my butt in gear. Just how she described it to me, had me falling in love with it. After that, I made it a point to find my copy as soon as possible and read the heck out of it.

Long story short, here we are. Sorcery of Thorns was able to give me a twist on books, blew me out of the water too. To think I could think differently about books then I already did, was something else. Every time I do see a book, read one or even hold one. To me it is alive, but to Elizabeth’s view they truly are alive and she is able to talk with and understand them. They are alive to her like they aren’t to any others. Books are also something to fear here too, interesting that it is not just their knowledge that they hold, but they themselves. People fear books in Sorcery of Thorns, yes they hold powers and they are alive. But, sometimes they need to be defeated or destroyed to save others. Because once unleashed on others, they will kill them. That was a bit of a shock to me as well, that these living books would change shape and kill. But, all of this causing for a far more intriguing plot that makes you wonder why?

The magic that is in this new world, is one unlike one I’ve seen before. Having spells and magic tethered to demon companions and books, each well known family having their own specialized spells that others could not even dream of performing. I was awed by all of this, and thinking to myself (as I find more and more often now) why I hadn’t read this sooner. Thorn, our main lead, and all around smart ass. Could do magic that I haven’t seen so wonderful since a few of the Harry Potter books, because there is this one scene toward the end of the book that gives me chills. Bringing to live status of Librarians to battle and protect. Which is my grandmothers favorite magic from the last Harry Potter movie (she hasn’t read the books, but our thing is to watch the movies together-but I have read the books, so don’t freak out just yet). Anyway, this moment in the book I was just awed by and loved so much, along with how the books jump in to help too. Truly magic made real (I have no clue if this is a quote from something else, so I’m sorry if it is! It just won’t leave my head).

Other then the magic, books being alive, there are two other things that had me loving this book. First of all, Sorcery of Thorns in not part of a series. It is a one off book, and I can’t say how happy that makes me. I don’t have to wait years to find out everything, and although its sad I won’t be seeing more of these characters. Rogerson gives us quite a bit at the end of Sorcery of Thorns to leave us satisfied and thankfully not screaming at the book. Although, I did yell a bit in shock and happiness. The second thing I really liked about this book was the romance, its pretty adorable. These two dorks are great and though the romance is not overwhelming and heavy. It is still  a great thing to read and get swept away in. To me that is the kind of great romance we need more of in the world and especially in books.

“I was warned I’d see some strange things in the countryside,” he said, “but I admit, I didn’t expect to find a  feral librarian roaming the stacks.”

It was always wise to be polite to books, whether or not they could hear you.

“I’m not decent,” she explained, hugging her arms to her chest.

Books, too, had hearts, though they were not same as people’s, and a book’s heart could be broken: she had seen it happen before.

“Tempting as the prospect is,” Nathaniel said, “we are not attempting world domination. It sounds fun in theory, but in reality it’s a logistical nightmare. All those assassinations and so forth.” At her blank look, he explained, “Silas used to tell me bedtime stories.”

“Gods, Elisabeth, I’ve been doomed since the moment I watched you smack a fiend off my carriage with a crowbar. How could you not tell? Silas has been rolling his eyes at me for weeks.”

“I’m already with you, and it suits me perfectly well,” she said. “You’re enough for me the way you are, Nathaniel Thorn, I want nothing more.”

She stepped toward the emerald flames, and they parted around her, curving away from her body like cresting waves. Nathaniel’s hand waited, outstretched.

Would I? Reread? Maybe. Recommend to others? Yes. Read more from this author? Yes.

Summary: All sorcerers are evil. Elisabeth has known that as long as she has known anything. Raised as a foundling in one of Austermeer’s Great Libraries, Elisabeth has grown up among the tools of sorcery—magical grimoires that whisper on shelves and rattle beneath iron chains. If provoked, they transform into grotesque monsters of ink and leather. She hopes to become a warden, charged with protecting the kingdom from their power.

Then an act of sabotage releases the library’s most dangerous grimoire. Elisabeth’s desperate intervention implicates her in the crime, and she is torn from her home to face justice in the capital. With no one to turn to but her sworn enemy, the sorcerer Nathaniel Thorn, and his mysterious demonic servant, she finds herself entangled in a centuries-old conspiracy. Not only could the Great Libraries go up in flames, but the world along with them.

As her alliance with Nathaniel grows stronger, Elisabeth starts to question everything she’s been taught—about sorcerers, about the libraries she loves, even about herself. For Elisabeth has a power she has never guessed, and a future she could never have imagined.