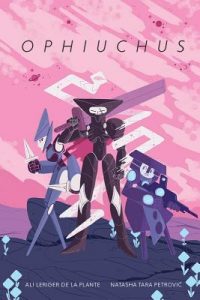 Review: This comic has such a pretty cover and the art did not disappoint! Although the plot was a bit murky at times, it was easy to catch back up and fill in the gaps. This is really just a story about a scary looking robot that wants friends and is really a marshmallow on the inside. Sadly, this is just a one-shot issue and with no plans to further the comic. Though, I can see more for this series, it does tie up everything nicely.

Would I? Reread? No. Recommend to others? Maybe. Read more from this author/artist? Maybe.

Summary: ALEXIS LERIGER DE LA PLANTE and NATASHA TARA PETROVIĆ bring their popular webcomic OPHIUCHUS to Image Comics! OPHIUCHUS is the story of the lone sentry of an ancient, inactive gate. One day, a strange being breaks through and infects her with a virus. And shortly after, she is approached by two machines, who implore her to follow them to the center of the universe to put an end to that virus—a malevolent being which rots all worlds.