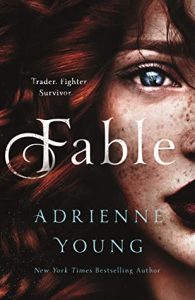 Review: This book wasn’t even on my radar, till a close friend of mine brought it over for me to borrow. She has told me she had a hard time getting into it, but would take another shot at it after I read it. I did end up having to restart reading this book, only because its extremely slow and dull in the start. Even when it does pick up, its not by much. I guess in the end, the only thing that had me finishing Fable was I didn’t have much else to do (and I knew I could finish it in a few hours).

Once your about five or six chapters into Fable, your able to predict the basic idea of how the rest of the book will go. Its so predictable from the main plot to the slight twists and of course, romance. There was not one time I was surprised or worried for any of the characters (or cared for them), which is sad. Because you at least want to feel something for the characters your reading about.

The romance in Fable shows up out of nowhere, I mean you can tell that’s what the author has been leaning to from the start. But, it happens at an unexpected time in the novel and there’s no real reason as to why (other then the book needed it, I guess). There is no slow build up, friction, heat or chemistry between these two characters that the romance takes place between (we all know it’s between Fable and the only guy named in the summery).

The only real part of the book that had any substance was when Fable would talk about her father and mother, and their love for each other. I mean, I would read a book about the two of them from cover to cover if I could. Their romance sounds like a worthwhile story, full of adventure and insane chemistry. All the quotes in Fable talking about their love for each other, were the highlights for me to read.

It’s sad to see Young not do so well again, with The Girl the Sea Gave Back not really hitting big-as Sky and the Deep did. I just keep looking for the same energy from Sky and the Deep and not finding any trace of it.

My mother had loved Saint with a love that could set fire to the sea.

“You want something in this life?” She came to stand over me. “You take it, Fable.”

Would I? Reread? No. Recommend to others? No. Read the next and last book in this series? Maybe. Read more from this author? Maybe.

Edition: I borrowed an advanced readers copy from a friend of mine. 366 pages.

Summary: Welcome to a world made dangerous by the sea and by those who wish to profit from it. Where a young girl must find her place and her family while trying to survive in a world built for men.

As the daughter of the most powerful trader in the Narrows, the sea is the only home seventeen-year-old Fable has ever known. It’s been four years since the night she watched her mother drown during an unforgiving storm. The next day her father abandoned her on a legendary island filled with thieves and little food. To survive she must keep to herself, learn to trust no one and rely on the unique skills her mother taught her. The only thing that keeps her going is the goal of getting off the island, finding her father and demanding her rightful place beside him and his crew. To do so Fable enlists the help of a young trader named West to get her off the island and across the Narrows to her father.

But her father’s rivalries and the dangers of his trading enterprise have only multiplied since she last saw him and Fable soon finds that West isn’t who he seems. Together, they will have to survive more than the treacherous storms that haunt the Narrows if they’re going to stay alive.