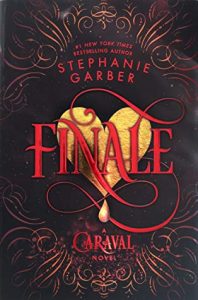 Review:“Every story has four parts: the beginning, the middle, the almost-ending, and the real ending. Unfortunately, not everyone gets a true ending. Most people give up at the part of the story where things are the worst, when the situation feels hopeless, but that is where hope is needed most. Only those who persevere can find their true ending.”

I wanted to start with this quote first because, well it explains so much about this series without giving anything away and pulling you in closer. Because the world of Caraval has once again done it all, lulling us in with love and magic.

This time around we get point of views from Scarlett and Tella, switching in between the two, giving us two different paths to the same ending.  We finally get to meet the sister’s mother and learn more about her own history and how it has impacted both girls in very big ways. Then there’s the romance for both our girls, Scarlett with Julian and Tella and Legend (I’m still not going to spill the beans on who he really is). With Scarlett and Julian having to face some hard facts about how much they love each other, and how Scarlett learns who she really is and what she can do. While on the other hand, Tella and Legend are having fun (but not really) with their tug of war relationship, and adding in Jacks, the prince of hearts fate. Well, let’s just say things get complicated fast.

But, aside from the romances, which are lush and rampant with high stakes and emotions- we have the magic. A night market full of wonderful magic, all coming at terrible costs. Then there are the Fates, and their wonderful but horrid magic. Oh boy, are you guys in for a life threatening ride, with sweets (strange I know, but you’ll get it). Speaking of magic… Let’s talk dresses! We have seen nothing in the last two books that compare to these new outfits, I really wish there was more fanart of all the clothes and Scarlett’s dress (you know the one that has a mind of its own and changes based on her emotions).

The best thing in this whole series, and in this book is sisterly love. Although Tella and Scarlett learn some pretty shocking things about their parents and who they themselves are (and willing to do). Both girls are able to come together and fight for each other, showing the greatest love toward each other. Because the strongest love is the one they share for each other. An unbreakable bond, no matter the blood between them. This was the biggest thing to me in this series and in Finale too. My younger sister is a lot like Tella, hopefully in all the best ways. And her and I share the same amount of blood between us as Scarlett and Tella do, and I love her no less. She will always be my little sister and I love so much, probably as Scarlett loves Tella (even when she is driving her crazy).

With the end of Finale, we have hints of adventure and hopefully a spin off series of Tella and Legend running away to go find Fates and magic hidden around the world. There’s also the little fact that Tella paid with  a promise of her daughter’s secret, a daughter she is not even close to having (don’t worry guys, she’s not having a baby till many years later-hopefully). So many we might get a spin off book of Scarlett’s and Tella’s children running around causing chaos. Which would be the most fitting. I know I’m looking forward to finding out!

Tella had a spark that could either set the whole world ablaze, or give it much-needed light.

He smelled of magic and heartbreak, and something about the combination made her think that despite what he claimed, he wanted to be her hero.

She needed more from him, or she needed him to let her go.

Their mother had once told them there was nothing like the love of a sister, and this was the moments where Tella could feel that truth.

Legend always looked as if he could walk away from an apocalypse unscathed, while Jacks always seemed as if he’d just come from a fight-all wild, almost violently reckless in his appearance.

but I don’t want to feel differently. I want to feel love in its every form. I used to be so scared of it, but now I think love is another type of magic. It makes everything brighter, it makes people who have it stronger, it breaks rules that aren’t supposed to exist, it’s infinitely valuable. I can’t imagine my life without it. And if you felt any love in your heart, you would understand.

“While I was gone, I tried to remember every word you ever said to me. I’ve thought about you every hour of every day I was away.

“I won’t ever move on, Crimson. ” He took her hand and brought it to his heart.

Scarlett enclosed her sister in another hug. She gave incredible hugs. She knew exactly how tight to hold, when to stay silent, and when to let go. But no matter when she let go of this hug, it would be too soon.

The words were like a period at the end of a sentence, small but absolute in their power.

You’re the same as you’ve always been, we just know more about you now. But it doesn’t change you- not unless you let it. And this news doesn’t change us, either. Even if we didn’t share any blood at all, I would still call you my sister and I would battle anyone who tried to say it wasn’t true. You are my family, Scarlet.

When I met a girl who loved her sister so much she was able to wish her back to life. You might possess magic, but love like that is real power.

Tella would have found another way. She didn’t and doesn’t need you to save her. She needs to save you.

She looked the way Love might have looked if Love looked in a mirror, infectiously happy and radiantly beautiful.

FROM B&N special edition copy-its from the extra bit

He’d shocked her. Good.  He’d let her win the last round, but he was going to win this one. He wanted her, and he’d do whatever it took to get her.

Would I? Reread? Maybe if I reread the whole series again. Recommend to others? Yes. Read more from this author? I can’t wait to see what she has next.

Welcome, welcome to Caraval…all games must come to an end.

Meanwhile, Scarlett has started a game of her own. She’s challenged Julian and her former fiancé, Count Nicolas d’Arcy, to a competition where the winner will receive her hand in marriage. Finaly, Scarlett feels as if she is in complete control over her life and future. She is unaware that her mother’s past has put her in the greatest danger of all.

Caraval is over, but perhaps the greatest game of all has begun―with lives, empires, and hearts all at stake. There are no spectators this time: only those who will win…and those who will lose everything.