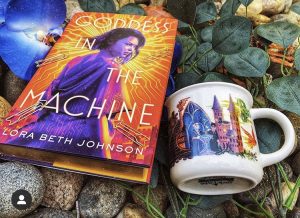 (All photos are from my own personal instagram, @Partimeavenger)

What’s in the box?

-Apron inspired by The Raven Cycle by Paperbackbones

-Arrow shaped paperclips inspired by The Hunger Games (by paperbackbones)

-Wood bookmark inspired by Star Wars (by In The Reads)

-Goddess in the Machine by Lora Beth Johnson. The book has a special foil design in the naked cover, gilded gold stained edges, signed pages and a different color cover.

I was once again surprised by the book this month in the July box, which I am so happy by. Although, there was not anything in the box I was amazed by other than the book.

Sadly, I have to start off with, I wasn’t too surprised excited by most things in this box. The first being the next Harry Potter mug from Cara Kozik. This is the fifth mug and has a moments from book six, Harry Potter and The Half-Blood Prince. Now, when I heard we were getting another HP mug for the series, I was overjoyed. I love these mugs so much and  hope to  have a full set one day (if they keep making them). Anyway, when I got this newest mug… I wasn’t impressed, you could barely tell which HP book it depicted and seemed just like a generic HP mug.

The other items I wasn’t really excited to get were the apron inspired by The Raven Cycle (I have no use for it and am not a fan of the series). Then there’s the arrow shaped paperclips, inspired by The Hunger Games. They’re nice and I think I can use them for photos, but that’s about it.

Lastly, we have the book and pin (by far the best!)The pin was designed by Jubly Umph, and it matches the book so well. The book this month is Goddess in the Machine by Lora Beth Johnson, which OwlCrate did a great job creating a stunning edition. This is another signed edition, new color on the cover and new foil design on the naked hardback  and gold foil edges. It is so pretty!

Although July’s box was a bit of a dud for me, I loved two items in it and liked two others enough. I have high hopes for the August box, which theme is Written in the Stars.

August’s YA Theme: Written in the Stars.