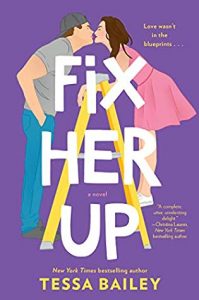 Review: I could squeal from just thinking about this book, because first of all-every time I think of it I blush like crazy and get a dreamy look on my face. Second, I look for this book on my shelves and my hands itch to pick it up and do a reread. I honestly mean this. I’ve had to put the book out of my eye line so I wouldn’t grab it all the time, its getting ridiculous.

To say in the lest that this book had me laughing out load, swooning, cheering, yelling and getting an extremely flushed face. Like, holy hell was it hot. Anyway, I was completely in love with the plot of Fix Her Up, along with falling head over heels for the characters. The plot of these women in town coming together, motivating and empowering each other. Creating The Just Us League, was brilliant and started by – Georgie (our main character), Rosie and Bethany (Georgie’s sister). Although they do get a few more people then they thought they would when Georgie and Bethany’s sister-in-law spills the beans to every woman in town (which cause them to be close to voting her off the island). But, the main part of this group is to help each person achieve their dreams, goals, and romantic ones too!

It was really great to get that depth for these two main characters, with Georgie. We find out and along the way -what she wants, her goal, what drives her, about her life, her big time crush (for what seems like all her life) and finding out along with her- more about herself.  Although you may judge Travis at first, his character also develops and grows. We learn about his fear of being like his father, what worries him, his new goal in life, his drive and what finding his one is like for him.

Now, since I did touch on this a bit before-the hot, steamy chemistry between Georgie and Travis. It’s time to dive a bit deeper, would’t you say? Going from not even noticing Georgie to full blown “she’s never going to walk right again”-is great. The romance is a bit of a slow build and one sided, in the beginning. Once things get rolling I didn’t dare blink, and I think I held my breath at the steamy moments too. Anyway, what really got me was Travis’s nickname for her was-Baby Girl. Normally I would not like this because I think it’s lazy coming up with “baby” for a sweet endearment for a guy to give a girl. But, how he says it, in the actual way and even thinking it. It was just WOW-HOT. Pretty much my favorite parts, and I swooned every time her called her Baby Girl.

I’m also excited with how the next book in the series was set up, it didn’t overpower the book, or the end of it. But, it does have you wondering what was going to happen between Rosie and her husband Dominic. Because they were having some hot and heavy tension going on between them during the mud run, oh did I say mud run? I meant the run from hell.

Georgie didn’t hold any illusions that she could be Travis’s one. But she couldn’t deny an odd sense of responsibility to prove to Travis he was worthy of finding and keeping his one. Even if it wasn’t her.

So real that her heart was capsizing under the rupturing pressure.

Would I? Reread? I already want to start it again! Recommend to others?  Yes! I am already bugging my friends to read this book. Buy more of this series? Yes, I’m already dying for Rosie’s book next! Read more from this author? Yes, she has me hooked now.

After an injury ends Travis Ford’s major league baseball career, he returns home to start over. He just wants to hammer out his frustrations at his new construction gig and forget all about his glory days. But he can’t even walk through town without someone recapping his greatest hits. Or making a joke about his… bat. And then there’s Georgie, his buddy’s little sister, who is definitely not a kid anymore.

Georgette Castle has crushed on her older brother’s best friend for years. The grumpy, bear of a man working for her family’s house flipping business is a far cry from the charming sports star she used to know. But a moody scowl doesn’t scare her and Georgie’s determined to show Travis he’s more than a pretty face and a batting average, even if it means putting her feelings aside to be “just friends.”

Travis wants to brood in peace. But the girl he used to tease is now a funny, full-of-life woman who makes him feel whole again. And he wants her. So damn bad. Except Georgie’s off limits and he knows he can’t give her what she deserves. But she’s becoming the air he breathes and Travis can’t stay away, no matter how hard he tries…