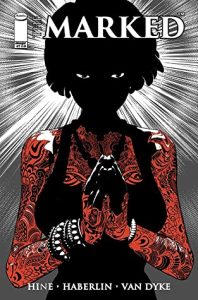 Review: This series totally reminds me of my artist friend, and this comic sounded so good. Bringing art to life with new magic that works once it’s tattooed onto your skin? I would totally do this, I mean wouldn’t most people? Though the story starts off in a predictable way of telling the story from the past and then being in the present telling how we got to where we end up. But, again with the predictable- because we can all tell how teenagers would do with this kind of power, it’s not going to go well. Although, I still really want to see what happens next.

Would I? Reread? Maybe. Recommend? Maybe.  Read more of this series? Yes.

Summary: Their magic is channeled through their tats!

The Marked may look like cool young influencers, but beneath the designer clothes their bodies are tattooed with the magical glyphs of an ancient order that secretly protects the world against evil forces. With no new occult threats, The Marked use their tattooed powers solely for the pursuit of pleasure until a young woman called Liza creates a dangerous new form of Hybrid Sorcery. The party is over for The Marked.