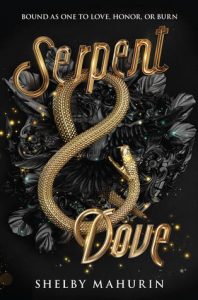 Review: To help me get into the mood to write this review I’m blasting Tove Lo music (which I feels fits Lou very well), and moving to the beat. Anyway, there has been a crazy amount of hype for Serpent & Dove since it first came out a year ago. I’m just getting pulled into the hype, getting a few book boxes for the squeal coming out later in 2020. But, I do have to say that the hype was very much big for a reason. As soon as I was able to pick up this book from the library, before our lock down started thank goodness, I was swept away in the hurricane that is Lou.

It is so hard not to like Lou, and the same could go for Reid (who I just love). These two are some highly reactive chemicals whenever within close distance to each other, its pretty great to read the explosions. Once these two started learning more about each other, and us about them, well its pretty much the end of us trying to fight our liking of the book. I didn’t try to fight my liking this book, but I was holding back my high standards because of the crazy hype and didn’t want to be let down.

The romance was pretty chaotic and steamy, don’t even get me started on the hand holding scene. I died and reread it so many times. But, the best part of this romance, other then the steamy-ness between Lou and Reid is the way Reid falls in love with Lou. I had a blast reading/seeing him slowly starting to fall and see them both try to fight it (reminded me a lot of Nina and Matthias from the Six of Crows series). But Reid is the big guy with anger, control and honor above all else. Reading how even with every crazy defiant thing Lou did, she was able to wriggle into his fortress of a heart. The exact same goes for Reid getting into Lou’s heart, when she tries everything to keep him out. Good thing he knows her weakness are sticky buns, yum!

With the different covens and magic, along with how people see them (and the crazy church), Serpent & Dove paints quite a world full of magic and some delicious sounding food. A world in which I can’t wait to read more of in the squeal, Blood & Honey.

I was no one’s sacrifice. Not then. Not now. Not ever.

I made a face. “That was tuna. I have a second stomach for dessert.”

Do not urge me to leave you or turn back from you. Where you go, I will go. Where you stay, I will stay.

Would I? Reread? Maybe. I’m still on the fence of my rating. Recommend to others? Yes, I think so. Read more of this series? Yes, I’ve already pre-ordered my copy of the second book. Read more from this author? Yes.

Summary: Bound as one to love, honor, or burn.

Two years ago, Louise le Blanc fled her coven and took shelter in the city of Cesarine, forsaking all magic and living off whatever she could steal. There, witches like Lou are hunted. They are feared. And they are burned.

Sworn to the Church as a Chasseur, Reid Diggory has lived his life by one principle: thou shalt not suffer a witch to live. His path was never meant to cross with Lou’s, but a wicked stunt forces them into an impossible union—holy matrimony.

The war between witches and Church is an ancient one, and Lou’s most dangerous enemies bring a fate worse than fire. Unable to ignore her growing feelings, yet powerless to change what she is, a choice must be made.

And love makes fools of us all.