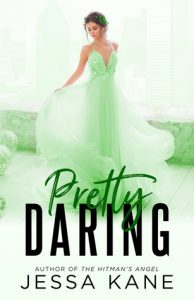 Review: Pretty Daring of course moved fast, if it didn’t I would have been worried. Anyway, I had a fun time reading. Good insta love and could loose myself in the story. The only big draw back for me in the book and sizzle department, was the two main characters getting walked in on-by the dad and kept going. This was the main point that brought the whole book down for me, and was creepy.

Would I? Reread? No. Recommend to others? No. Read more from this author? I think we all know I will.

Summary: Ophelia has always been treated like a spoiled, little rich girl. Just once, she wants to be seen as a woman. When she collides with her housekeeper’s son on the day he’s released from prison, she gets her wish—and then some. After seven years behind bars, Ezra can’t control himself around such a sweet, young thing like Ophelia. She’s claiming to be his mother’s neighbor and he senses she’s lying…but he’ll have to worry about the details later. After she’s been claimed…