Escaping from Houdini (Stalking Jack the Ripper #3) by Kerri Maniscalco 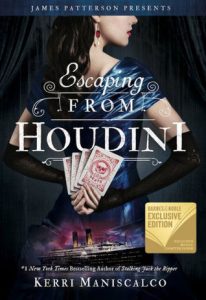 Review: I was so excited to get to this third book in the Stalking Jack the Ripper series, because this one seemed the most mysterious and lush with a night carnival. This was actually the first book of the series I bought before even getting into the series, crazy right?!

Anyway, as I started reading Escaping From Houdini I started to get more and more nervous for Audrey and Thomas. Both are amazing characters and their romance/banter/steamy is off the charts, but a distance between them opens in this book. There’s an added potential love interest, right after Audrey says yes to marrying Thomas (my dream come true really). In light of all of this pretty early on in the book, I ended up doing a horrible thing-something I haven’t done since I broke the nasty habit I had a kid. I peeked in the book, many times. I just wanted to make sure everything would be okay by the end and that I would see more Audrey and Thomas! But, in the end I completely ruined my reading experience of this book (and spoiled everything). Because while all of this was happening I was forcing myself to finish this book, when I was in an awful head-space that I shouldn’t have been reading in.

I am looking forward to the last book in the series, Capturing the Devil. Which I have started to read, with no peeking. But, once again I found myself having a hard time getting into the book and in the end had to set aside for now.

Anyway, though there is a lot that takes place in Escaping From Houdini-Audrey is able to get her cousin back, explore new talents and solve some more murders. We do not see as much romance between her and Thomas, yes they are still crazy in love with each other. But, there was not a whole lot of banter that we love. There was a lot of internal monologue from Audrey about her love for him, and for the interest in Mephistopheles and a different future. Though it wasn’t the same or had the same amount of heat or chemistry that Thomas is able to have at all times. We do get some really great Thomas banter of him and Mephistopheles, which Thomas clearly wins every time. I was completely surprised at how easy it was for Audrey to even have that much interest in another man, when she’s engaged to Thomas. Although, I can understand having a bit of cold feet and wanting to make sure you are making the right choice (and it’s a major change to her life to be married).

I did love the lot of being on a cruise with a night carnival, all of it was very lulling you into the plot and grasping hold of and holding you prisoner. If any of that makes sense at all. But, trust me when I say you will be kidnapped by the vivid world/plot that Escaping From Houdini has hidden between its pages. It’s impossible to regret running away to the carnival in this novel, you’ll only regret having to leave it at the end.

I cannot wait for my heart to burst. Really livens up an otherwise monotonous Sunday evening, Wadsworth.

This was utterly thrilling and horrible. I hated it almost as much as I loved it. And I adored it more than I cared to admit.

Though I am rather handsome in this suit. I suppose if it’s my time to go, I might as well go in style. Be sure to keep my face intact. I want you to swoon and mourn at my funeral.

I know this might all be a terrible mistake- an illusion more elaborate than those in this carnival, but for the first time, I am the master of my fate. I feel as though I’ve been freed from a cage and I can finally breathe again. How can I give up this freedom?

In this moment I understood the draw of the carnival- the magnetic pull to run away from restrictions and simply let go. To allow myself complete and utter freedom to soar.

He might be acting interested for show, but he saw the truth of me. A truth I didn’t even think Thomas had discovered.

-he handed my treat over- “Tell me this isn’t the most delicious thing you’ve ever tasted. Side from me, naturally.”

Tell me, how does Mr.Thomas James Dorin Cresswell apply his deductions to a scene such as this?

“I’ll play the part of the victim,” I said. “You’re a much-better murderer.”

“True.” He opened the door and stepped outside. “I haven’t been caught yet.”

Mephistopheles shook his head. “You’re quite smart, aren’t you?”

“Of course I am,” Thomas said. “Is that supposed to be insulting? Whatever will you comment on next; the golden flecks in my eyes? The sharpness of my jaw?”

“The extraordinary size of your ego?”

An impish grin slowly spread across Thomas’s face. “It’s not the only prodigious thing I can boast about.”

“Ignoring that sentiment, you’re saying if this were a story, you’d be the hero, correct?’

“Don’t be ridiculous,” Thomas said, appearing truly offended. “I’m dark and mysterious. And as likely to kiss or kill you on a whim. Does that sound heroic to you? Not many heroes are good-looking masterminds. I, however, have harnessed my dark talents for the greater good.”

“I prefer ‘unpredictable.’ It’s got a nicer ring to it.”

“No”-Thomas’s voice was cordial enough to be a warning- “but Miss Wadsworth will gladly send you overboard if you keep that tone up.” At Houdini’s confused expression, he added, “She’s the muscle. I’m clearly the charm.”

There was no world I wanted to live in where Thomas Cresswell wasn’t a part of it. No matter the odds stacked against us, I’d fight for him until I drew in my last, shuddering breath. Even in death I’d never stop coming for those who threatened my family. Because that’s what Thomas had become. He was mine-I’d chosen him just as he’s chosen me, and I’d defend him with everything I had.

Thomas let out a shuddering breath, eyes filled with adoration. “I will dance with you across this universe and into the next, Wadsworth. For as long as you’ll have me.”

Would I? Reread? Maybe one day, far into the future. Recommend to others? Yes, it’s a great book and series. Read more of this series? YES! I only have one more book left! Read more from this author? yes!

Summary: This B&N Exclusive Edition includes a full bonus chapter featuring a special encounter with Audrey Rose and Thomas, not available in any other edition!

The #1 New York Times bestselling series that started with Stalking Jack the Ripper and Hunting Prince Dracula continues in this third bloody installment! A luxurious ocean liner becomes a floating prison of madness and horror when passengers are murdered one by one…with nowhere to run from the killer.

Audrey Rose Wadsworth and her partner-in-crime-investigation, Thomas Cresswell, are en route to New York to help solve another blood-soaked mystery. Embarking on a week-long voyage across the Atlantic on the opulent RMS Etruria, they’re delighted to discover a traveling troupe of circus performers, fortune tellers, and a certain charismatic young escape artist entertaining the first-class passengers nightly.

But then, privileged young women begin to go missing without explanation, and a series of brutal slayings shocks the entire ship. The disturbing influence of the Moonlight Carnival pervades the decks as the murders grow ever more freakish, with nowhere to escape except the unforgiving sea. It’s up to Audrey Rose and Thomas to piece together the gruesome investigation as even more passengers die before reaching their destination. But with clues to the next victim pointing to someone she loves, can Audrey Rose unravel the mystery before the killer’s horrifying finale?