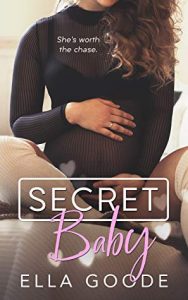 Review: This book sounded good and the sample made me want to read more of it, so I got it. It ended up having an okay start, but was lacking. Just didn’t like the romance between the two characters, it wasn’t even there really. They also did not get to know one another, there was no sizzle between them. The main guy also did not listen to what the girl really wanted, picking what he wanted over hers and calling it good enough.

Summary: Madeleine has a secret. Five months ago, she met an irresistible man and made a very dumb mistake. She knows that a random hookup won’t want to be saddled with a baby and she’s way too vulnerable in this state to be rejected. Keeping a baby from the daddy might seem wrong, but it’s the best way to protect herself and her child for now.

Oliver wants answers. Five months ago, he met the woman of his dreams, took her up to his hotel room, made love to her until they both passed out only to wake up alone. He’s hired private investigators but with no last name or photographs, his hookup has remained a mystery. And he doesn’t like mysteries. Or surprises.

Oliver knows the Madeleine is the one for him. When he finally finds her, he’s determined to keep her…even if the father of the child isn’t him.