The Bone Houses by Emily Lloyd-Jones 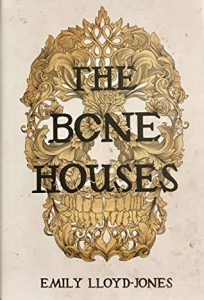 Review: I could not take my eyes off this book after getting it in my OwlCrate box, I’m not even kidding. It never made it’s way to any book shelf, it just went straight into my hands. What really pulled me into reading The Bone Houses was the story it starts with in the intro, lulling you in so slowly-till the point that when you look up your half way through the book. The intro that I loved was about a girl and her father, he who dug graves and she followed him as he worked. The little girl who follow her father  one day into the forest, a place she was never to go. Running into a living skeleton, or what we will come to know as a bone house. The girl’s father saved her and then taught her the ways of digging graves and taking down bones houses. After this intro (with more details in the book), we start our story with Ryn, who was the girl from the intro.

Anyway, reading about the bones house was interesting and cool. I was mostly happy that they weren’t technically zombies, which is a something I don’t like to read about because they scare the crap out of me. But, it seems that the bones house are become more frequent and are starting to kill more and more people. Ryn and Ellis set out to figure out why, well Ellis is there to make a map of the uncharted forest and to seek some of his own answers. There were many times that I couldn’t put the book down because I desperately needed to know that these two would be okay. Because there was no great place to stop reading during all the heart pounding moments they had going through the forest, due to the bone houses and humans.

There is also a bit of romance, but it slowly sneaks up on you because the story isn’t focused or dependent on it. But it’s so slight and has some longing to it, which could just be from yourself wanting for more or even something between Ellis and Ryn. It does happen but not a lot of heat behind it, more like a soft kind of love.

As they were traveling through the deadly forest and beyond to the abandoned kingdom of the fae, I found myself fascinated and loving the world that Lloyd-Jones has created. Every aspect of this novel was dark and haunting, and I honesty could not get enough. There are also a few surprise that will bring a few tears to your eyes, it’s all very guessable as the book gets closer to its climax. But, it doesn’t take away from the impact it will have on the reading of it. I was just really happy that by the end of The Bones Houses that we didn’t have to deal with the same type of bittersweet ending that Lloyd-Jones gave us in her first novel, The Hearts We Sold, which had me feeling empty.

The forest did not scare her; rather, she wanted to be like it: ageless and impervious, cruel and beautiful.

This was the problem with pain, he thought. It refused to be quieted. It devoured, the way flame consumed wood. It took and it took, and all he could do was lie on a mattress of straw, torn between boredom and fear.

To leave, she would have to cut the memories out of her heart- and she imagined her grief spilling forth like blood.

She reminded him of an ocean- beautiful, with enough salt to kill a man.

Would I? Reread? Maybe. Recommend to others? Yes. Read more from this author? Yes.

Summary: Seventeen-year-old Aderyn (“Ryn”) only cares about two things: her family, and her family’s graveyard. And right now, both are in dire straits. Since the death of their parents, Ryn and her siblings have been scraping together a meager existence as gravediggers in the remote village of Colbren, which sits at the foot of a harsh and deadly mountain range that was once home to the fae. The problem with being a gravedigger in Colbren, though, is that the dead don’t always stay dead.

The risen corpses are known as “bone houses,” and legend says that they’re the result of a decades-old curse. When Ellis, an apprentice mapmaker with a mysterious past, arrives in town, the bone houses attack with new ferocity. What is it that draws them near? And more importantly, how can they be stopped for good?

Together, Ellis and Ryn embark on a journey that will take them deep into the heart of the mountains, where they will have to face both the curse and the long-hidden truths about themselves.