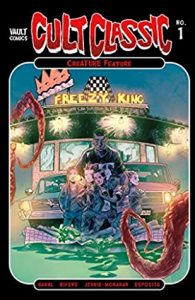 Review: I know a few of you are probably wondering why I would read something like this, but in reality I only saw the title and that’s what pulled me into reading this comic. But, just a few pages in had me super grossed out and freaked out. I mean little girl had her body invaded by an alien slug, and had her bones walk out of her skin. So gross! ugh. I also was feeling bad about one of the other little kids that ended up being that this sleepover gone horribly wrong. His older brother was trying to call him too, because he was worried about him being at his first sleepover. Other then this first issue being super freaky, gross, horror filled, it also bums you out a lot.

Would I? Reread? No.  Recommend to others? No, I don’t think so. Read more of? I might read one more issue, just to make sure what happened in this issue really happened and not some sort of dream.

Summary: Eons ago, visitors from outer space buried an item of unimaginable power in the primordial swamps that would one day become King Lake—a quaint little basin on the edge of Whisper, USA. Millions of years later, a comet’s radioactive waves awaken the monster slumbering beneath the lake. As the beast feeds on America’s sweet, delicious youth, brain-slugs infect the quiet town, causing victims to vomit up their kill-hungry, zombified skeletons. But for seventeen-year-old Jarrod Parker, none of that stuff matters much. For him, this isn’t about the Apocalypse. It’s about payback. Nothing—not his friends, not the undead, not even the end of the world—will keep him from vengeance.