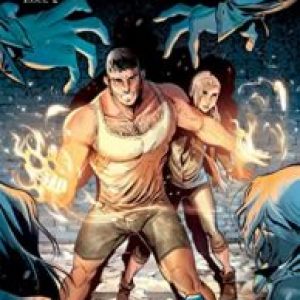 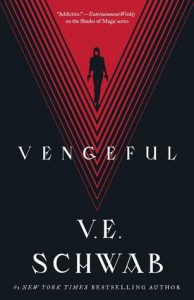 Review: Even though I had just read the Vicious maybe about a month before Vengeful came out, and I had Vicious for a very long time (maybe a few years). I was so happy to finally have this book in my hands, and even though I had not been waiting eight years like most others. I was still so excited to get to jump right back into this Villains world, and I mean with that ending to Vicious? I needed to know what happened next, same as everyone else.

Anyway, let’s just jump straight in shall we? It’s been a few years since (I think 3- 5) the end of Vicious and Victor Vale is alive and traveling with Sydney, Mitch, Dol and Dominic. Dominic pops in and out of their lives, as Victor has him working uncover for him and keeping an eye on a place of interest. Sydney has not aged much, and she is working on her powers more and more. Trying not to cause the same side affect’s that Victor is dealing with, because she loves him and wants to help him go back to the way he was before. But, she also wants to bring back her sister- which we all know is a terrible idea.

There are two main parts of this story plot, Victor Vale and gang- with Victor’s goal being not dying anymore. No, not immortality. But he’s having seizures  that cause him to die for longer and longer. On the other half of this we have Marcella, and boy is she amazing to watch. I can’t even begin to start to talk about everything with her, but I’ll try. With Marcella’s new power (which I love and can see myself having), she doesn’t want to hide but to rule the city and maybe more. And bringing in more and more people with powers to rule along side or (or just slightly back). The time for female is here readers, and your going to love it and want vengeance.

Of course it wouldn’t be a Villains book without our local insane worst of the worst villain himself, Eli Ever. Not so high and might this time around, and degraded at every step. Along with not having the exact same ideology as before, don’t get me wrong he is still crazy pants. But, you might feel a smidgen of feelings for the guy that Eli has become, you know getting experimented on all the time.

You will love all the ways that Schwab has been able to do it again, drive us fans crazy with such a cunning Victor Vale-thinking of everything. Then there’s the ending, yup. THAT ENDING ALL OVER AGAIN!!! I don’t know if I can wait eight years from now to know how everything works out for our chosen family- Victor, Sydney, Mitch, Dol and Dominic! I just want so much more! There’s also the little fact that she left us hanging with one of the power fueled people out there able to look like anyone at all.

Heat filled the room, her lungs, her head. Marcella coughed, but couldn’t catch her breath. I will ruin you.

It was just so easy.

As if everything had wanted to come apart.

There was probably some law about that.

Order giving away to chaos.

But I don’t want to survive, sneered Marcella. I want to thrive. And I promise you, I’m just getting started.

And if Marcella’s plans went up in flames, well, she’d take the whole damn city with her.

EVERY end may be a new beginning, but every beginning had to end.

Ev Reread? YES! Recommend to others? Yes. Read more of this series? Please give me more books in this series! Read more from this author? Oh my gosh! Yes!

Summary: Eli Ever and Victor Vale were only medical students when their mutual discovery that near-death experiences can, under the right conditions, manifest extraordinary abilities.

They were best friends, and rivals, and then enemies. They were dead, then alive, and then—Eli killed Victor, once and for all.

Or so he thought—but Sydney Clarke felt otherwise, and used her own superpower to tip the scales. Now, a trio hides in the shadows, while another takes advantages of post-death life to take over the city of Merit.

If there can be life after death—will there be calm after vengeance, or will chaos rule?