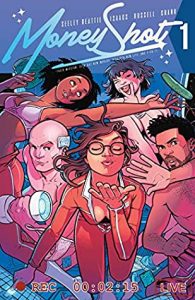 Basically, this is a comic about when a group of scientists have lost all funding for their research and Aliens do exist but really want nothing to do with the humans on Earth. So, to get funding and expand their research, along with putting their skills to use- they deiced to travel space, via “MoneyShot” as everyone calls it and film themselves having sex with pretty much every alien they come across.

I honest can’t wait to read more of this series, because who could ever come up with this kind of idea for a story?

Would I? Reread? Yes! Recommend to others? Hell yeah I have! Read more of this series? Yes!

Summary: In the near future, space travel is ludicrously expensive and largely ignored. Enter Christine Ocampos, inventor of the Star Shot teleportation device with a big idea: She’ll travel to new worlds, engage—intimately—with local aliens, and film her exploits for a jaded earth populace trying to find something new on the internet. Now, Chris and her merry band of scientist-cum-pornstars explore the universe, each other, and the complexities of sex in MONEY SHOT! A story about scientists having sex with aliens for the glory of mankind—and money.