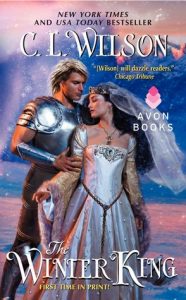 Review: Okay, this is my second to last book review that is extremely late, as I read this back in 2017. I mean, really? Come on Ali, get it together. You may ask, how can I review a book I read back in 2017? Well, I’ve reread this book so many times since then-cover to cover. Although it’s now 2020, I still love this book like crazy and remember everything in it pretty well. So, let’s start at the beginning shall we? I picked this up while I was at an author event during my first year at my new college, I had heard a beyond the highest recommendation for this book -and it just happen to be the only copy at the bookstore I was at. That pretty much meant that this copy was suppose to be mine, at least how I like to justify buying a book on a college students budget.

I haven’t ever read anything like The Winter King before, super high fantasy, romance, magic, and above all else adult. It just took my breathe away from page one. Though The Winter King is just the first of the Weathermages of Mystral series (the second book has since come out, which I already have a review for that will be coming later), it can stand on it’s own. By this I mean that it’s a whole series in just one book.  When you reach the end of the book you don’t have to worry about having to wait for the next book in the series to find out what happens to Storm and Wy, you get all of their story in this first book. The rest of the series is about each of the seasons, a nickname given to Storm’s three older sisters (sadly, we will have to wait many years before we get book three and four).

I’m finding it hard to talk about the plot or characters from The Winter King, because a lot of it all entwines and I would hate to spoil the book for anyone. But, there are some really good parts I can talk about without giving away too much. The romance is the best trope ever, enemies to lovers. You will be screaming and gushing about Storm and Wy, who are completely perfect for one another. Their moments together create a sauna that will have you red and sweating like crazy, with the added bonus of being able to feel your hear pounding like crazy. I lived for all of their interactions, which occur all the time-thank goodness. You can see the friction between these two and their strong personalities to the point that there will be sparks popping out of the pages.

I fell so in love with our main character Storm and Wy, but Storm stole a very big part of my heart as soon as she showed up (so basically within the first few pages). She is a completely and utterly a storm to be reckoned with, as her weather name suggests. It’s hard to describe her more, it’s something that you have to see for yourself and once you do-you’ll be lost for her too. Wy on the other hand is an asshole, but in the nicest ways. But, really he is mean and does show his soft spots with Storm-which makes it all the better. Please do yourself a favor and just go out and get this book, read it and you’ll be thanking me for setting you up with such a fall in love book.

What was wrong with her that no one wanted her?

She was a survivor. She always had been. And she wasn’t going to be a pawn in other people’s games anymore.

“You are a troublesome, hardheaded wench.”

“Am I? How interesting. I had no idea how closely we resembled each other.”

Several times, he reached across the table to lift Kham’s left hand and press a kiss against her wrist,

And then  she realized what he was doing. He was giving her a memory of her own to cherish. The knowledge robbed her breath and made her throat go suddenly and painfully tight. She blinked back the rush of tear that blurred her vision and threatened to spill and embarrass her.

I wed a fierce and fearless Summerlass with lightning in her hair and a storm in her eyes.

Would I? Do a reread? Heck yes! I just finished one. Tell others to read this book? Yes, and I have been.

After three long years of war, starkly handsome Wynter Atrialan will have his vengeance on Summerlea’s king by taking one of the man’s beautiful, beloved daughters as his bride. But though peace is finally at hand, Wynter’s battle with the Ice Heart, the dread power he embraced to avenge his brother’s death, rages on.

Khamsin Coruscate, Princess of Summerlea and summoner of Storms, has spent her life exiled to the shadows of her father’s palace. Reviled by her father, marriage to Wintercraig’s icy king was supposed to be a terrible punishment, but instead offers Kham her first taste of freedom—and her first taste of overwhelming passion.

As fierce, indomitable Wynter weathers even Khamsin’s wildest storms, surprising her with a tenderness she never expected, Kham wants more than Wynter’s passion—she yearns for his love. But the power of the Ice Heart is growing, dangerous forces are gathering, and a devastating betrayal puts Khamsin and Wynter to the ultimate test.