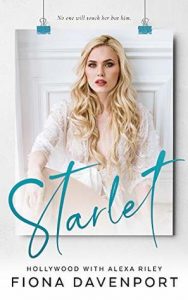 Review: The idea was sound, then too fast for even insta love between these two. Well, really I didn’t get why the main girl was the one for him. She had been crushing/in love with him for a long time (she’s a fan of his and wanted to act with him one day and for him to be her first onscreen/and off screen kiss). I just didn’t get how he knew she was it, when he saw a photo of her and read up a very little on her. In other news, I kept thinking about how the main girl’s career was picking up-then boom- pregnant again at every turn. The sizzle and romance was just okay, because well-see above.

Summary: Nicole Callahan is an up-and-coming movie star. When she gets her big chance, the role requires her to get romantic with her co-star on screen. But there’s only one man she can picture herself kissing…even if she’s never met him in person.

Austin Hayes has been a household name since he hit it big as a child actor. His refusal to so much as kiss a woman on screen hasn’t stopped him from having a successful career in Hollywood. But when Nicole wants him as her co-star, he throws all the rules out the window because this starlet is meant to be his.

Warning: This Hollywood with Alexa Riley story will leave you seeing stars. The over-the-top possessive alpha, each of them saved themselves for the other kind.