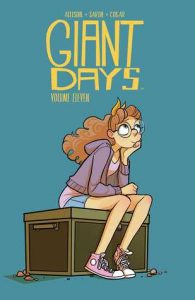 Review: I always have such a great time reading Giant Days, and volume 11 is no different. We get to watch as poor Daisy gets sucked into a Christmas village cult and bringing in a whole bunch of new members. We also get to check in with Susan and McGraw living in romantic bliss, Susan fears she might be losing her edge of evilness. I think she’s still got it, but is feeling run down with college life and now living with McGraw (which is the cutest). Other then what these two have going on, Esther is having a bit of a rough time coming to terms with her feeling she has for Ed. Ed who was in love with Esther, confessed his feeling to her when drunk and broke both his legs. He also seems to have gotten over it and is dating a new girl. Esther seems to be handling it all well in her Gothic way, even rebounding with a new beau. But, it’s Esther, and it doesn’t last all that long.

Esther does end up helping Ed with some dating advice, once they got through all the awkwardness from the confessed feelings. Even though it pains Esther to help Ed and his new girlfriend, she takes the higher road and really helps him out. All of this really shows how much Esther has grown up over the course of this comic series. This can be said for all the girls, McGraw and Ed too. Ed isn’t moping around after Esther anymore and is finding his own way. Susan and McGraw are the most Adult out of the gang, living together and loving each other-which I say again, is the cutest and the best thing to has ever happened. Daisy is also doing really good after the split with the worst person ever, and is finding what she’s good at and what career she wants to have after college.

Now, back to Ed. He takes the leap and goes to Australia with his girl friend to visit her family, and spend time with her. Ed gets to be center show as he and the GF have some pretty crazy adventures, and I think Ed was the most surprised about this.

So, if your looking for a great time, some laughing and a series to get hooked into-look no father then Giant Days volume 11.

As you may know, the National Health Service is at a breaking point. And so, therefore is Susan.

Would I? Reread? Heck yes, I love this series. Recommend to others? Yes!!! I will never stop. Read more of this series? Yes! Read more from these authors and artists? Yes please.

The third (and final!) year of university is finally here, and BFFs Daisy, Esther, and Susan are in for some surprising upsets in their first semester. Between Halloween run-ins with Daisy’s dreaded (dreadful) ex, part time gigs at a shady pop-up Christmas market, Esther dating a tech-bro and Susan attempting to be…romantic, there’s still plenty to learn and more than enough misadventure to squeeze in before it’s time to don caps and gowns! Written by John Allison (Scary Go Round, By Night) and illustrated by the incredible Max Sarin, Giant Days volume 11 kicks off third year with a bang, collecting issues #41-44 of the Eisner-Nominated series.