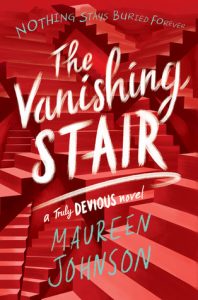 Review: I have wanted to read this book for the longest time, waited a whole year to get it. Then when I did get The Vanishing Stair, I waited till December of 2019 to read it. Just so that I would be a bit closer to getting the third and final book right after (end of January) to read. As I’m writing this it’s March and I still haven’t gotten my hands on the third book, I’m completely insane-I KNOW! But, I really wanted to get this review done before I even thought of getting the last book.

Holy cow, do I need the next book! Like right now! Anyway, if you looked at my copy of The Vanishing Stair. You would see it flagged with blue, because I used blue to mark clues (like “blue’s clues”). Going through the book I was making a list of all the clues for the past and present murder(s), trying to figure out different angles. I feel like a mad woman. I called my best friend and told her all about both books in the series and all the information on the past mystery to get her help-and then to tell about who did it (and what we still don’t know yet). Because, yes! We do get a little closer to finding out everything! I want to say so much more about the mysteries, but really-anything more would spoil a lot.

There is one thing more about the past and current mysteries that is bugging in this new book, and that’s the writer for the biography of the “Truly Devious” case from the past. Which I think connects to the present case too, and I have to say the writer and her nephew are very suspicious (or I’m just paranoid now). But, I also think that a few of the teachers are also suspicious too.

Anyway, on to other topics for the book. The romance for Stevie was still good, and was not the main spotlight for the book- which I liked that it wasn’t. But, the romance mixed with the mysteries and the anxiety that Stevie has-well I can understand why Stevie ends up the way she does at the end of The Vanishing Stair (I would be in the same way too, if I was in her shoes).

The security guard that is nice to Stevie and takes her seriously, is still one of my favorites-but I’m also suspicious of him too (this is my life now, lol). But, other then this- I have to say that everyone is a suspect for both cases (even if it doesn’t work timeline wise, it could be connected or not at all). And knowing “Attic” will have you screaming and shaking the book, I can’t say why. But, just keep it in mind (evil smile here).

Where do you look for someone who’s never really there? Always on a staircase but never on a stair.

Stevie felt that old tyrant in her chest, the unsteady heartbeat that signaled the start of an anxiety attack.

This was the sympathetic nervous system at work, her therapist had told her. To work with anxiety, you had to let it complete its cycle.

Flannel was okay. Apples were fine. Pumpkins were the watermelons of fall. Were these the thoughts  an autumn person had?

She put on her headphones, turned on My Favorite Murder

I like you coat. She meant it to come out dry and unaffected, but instead her bastard throat betrayed her with a tiny croaking sound on the last syllable. The body was the enemy of the mind.

Fight or flight. like her therapist said, once you start the circuit of response, you have to complete it. If you feel like you have to fly, you fly until your body tells you to stop or until you are stopped by an outside force.

The world is a door. Books are the key.

“Okay,” Nate said. “My motive is that I prefer dragons.”

“To the absence of dragons.”

Would I? Reread? Yes, I need to make sure I found all the clues! Recommend to others? Yes! I tell people about it enough! Read more of this series? DUH, I need answers! Read more from this author? Hell yeah.

Summary: All Stevie Bell wanted was to find the key to the Ellingham mystery, but instead she found her classmate dead. And while she solved that murder, the crimes of the past are still waiting in the dark. Just as Stevie feels she’s on the cusp of putting it together, her parents pull her out of Ellingham academy.

For her own safety they say. She must move past this obsession with crime. Now that Stevie’s away from the school of topiaries and secret tunnels, and her strange and endearing friends, she begins to feel disconnected from the rest of the world. At least she won’t have to see David anymore. David, who she kissed. David, who lied to her about his identity—son of despised politician Edward King. Then King himself arrives at her house to offer a deal: He will bring Stevie back to Ellingham immediately. In return, she must play nice with David. King is in the midst of a campaign and can’t afford his son stirring up trouble. If Stevie’s at school, David will stay put.

The tantalizing riddles behind the Ellingham murders are still waiting to be unraveled, and Stevie knows she’s so close. But the path to the truth has more twists and turns than she can imagine—and moving forward involves hurting someone she cares for. In New York Times bestselling author Maureen Johnson’s second novel of the Truly Devious series, nothing is free, and someone will pay for the truth with their life.