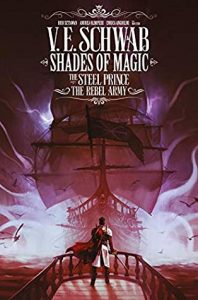 Review: Wow, the battle between Maxim’s soldiers (and any towns people who joined the cause) vs the rebel army finally gets set into motion. He seems to have made multiple plans to work everything out of course-by him I mean Maxim and the new leader of the rebel army. True matches for one another. Although this new leader is going to have to watch his back, as the people who once were the main leaders (and now second in commands) are planning to kill him as soon as the kingdom is n ruins. I have no doubt that he’s planned for it. On one hand I am so ready for the main battle to finally happen in the next issue, but at the same time I don’t know if I’m ready to say goodbye to this comic series. I’ve really enjoyed the art, story and overall-Maxim’s journey to who he ends up being in the Dark Shade of Magic series.

The rest of  you. Do what you do best.

Would I? Reread? Yes. Recommend to others? Yes! Read more of this series? Duh. Read more from this author? Again, DUH!

Summary: New York Times bestseller V.E. Schwab unveils the penultimate chapter of The Steel Prince trilogy – a canonical entry in her award-winning fantasy novel series, Shades of Magic! Prince Maxim and his allies are cornered in the city of Verose, under siege with nowhere to run. But does the Steel Prince have a plan of his own? Illustrated by hit art team Andrea Olimpieri (Dishonored) and Enrica Eren Angiolini (Doctor Who: The Thirteenth Doctor).