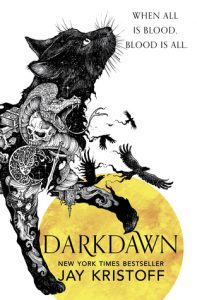 Review: Ugh, I do not want to review this book, it’s hard enough putting full sentences together since finishing it. But now? Almost impossible to actually talk about this book. Most of the time, it’s because I keep getting stuck on some of my favorite quotes. A lot that I still use in conversation and in my own head, all these months later.

Kristoff has pulled a complete inception on all of us with DarkDawn, everything we think we know-we don’t. I was hit with surprise after surprise, completely and utterly shocked by the end of this journey- and boy what a hell of a ride too. Because along with the surprises, we are hit with everything we have been questioning all these years. Finally getting answers to our desperate pleas. At least for me they were. I can’t stand not having all the pieces of the puzzle by the end of a series (don’t even get me started on A Series of Unfortunate Events).

One of the many surprises I found myself having was liking Tric more so in this book then I ever had in any of the others, although I was not a huge fan of any of overall Romance for Mia. I can’t explain it, I just wanted the vengeance and shadows. But, I do have to say we are given the sexiest moment ever. Only slight nudity, no sex, and a whole hell of a lot of blood and gore. When you get there, you’ll know.

Mr.Kindly steps up his game toward Mia, questioning if he and Eclipse were good for her and if it might be worse that they take away her fear. He’s also very tricky, but gets his own revenge-which I cried and thanked him for. Again, you’ll know what I’m talking about when you get there. Also, Eclipse was perfect and amazing. She really bonded with Mia’s little brother, she became his shadow and loved him. I think and I’m pretty sure I’m right, in saying that she thought of another little boy she became the shadow to in the past (breaks my heart).

Mia’s little brother is not much different from our girl, same attitude. But, it was so sweet when he warms up slightly to her and how she would do anything for him-even if he hated her (which he does for a long time). Although, through the brother (sorry! I forgot his name) we learn more about their father (their real father) and who their mother and other dad were in the past. And him and Eclipse! I just can’t!

We get crazy intense battle scenes, plotting, false starts and just all out blood baths. Let’s also not forget pirates, one of which you will love because he is just all around great and funny (and pretty much gives fans the best most quotable quote). Along with the pirates, we get a shit ton of information to all our questions and then some. I mean wow, I still can’t believe how intricate Kristoff got with the worlds, gods, characters, the murder church and shadows. Just, wow. Every time I think about the amount of information we got in this book, I just feel shell shocked.

In the end the action was amazing, as was the emotions and planning. I was screaming along with the Mia as she fought, and I got very strange looks from family. Anyway, I do have a bit of a bone to pick with Kristoff about the ending. It seems he has become a big softy and I don’t like it in this context. I was mostly pissed about one part and I will be asking him questions about it when I see him next (crosses my fingers he will be touring in my state sometime soon!).

“NeverNight,” he muttered. “Stupid name for a book.”

HE WAS THE EATER OF FEAR. THE DAY IN THE DARKNESS.

You know what they say. What doesn’t kill me had better fucking run.

“This is her story,” Aelius replied softly. “And that’s how it ends. A republic in ashes. That’s a good ending, Mercurio. Better than most get.”

We know all stories end, whippersnapper. Including hers.

“I will rip all three suns out of heaven to keep her safe, you hear me?” Ashlinn vowed. “I will kill the fucking sky.”

I remember. You had a red dress on. And a crossbow bolt in your ass.

Don’t fuck with librarians, young lady. We know the power of words.

I am the war you cannot win.

And so she leaned over the railing. Spat into the sea. “Come for me, then bitches.”

The onlookers in the tiers below were equal parts horrified and awed, watching slack-jawed as Mia turned and flopped onto the throne, half-naked and covered in gore, long dark hair soaked with blood barely protecting her modesty. She propped her bare feet up on Valdyr’s headless, twitching corpse. Fished about in the arse pocket of her britches, wincing, and finally pulled out her thin, battered cigarillo box. Eclipse coalesced at her feet, black fangs bared, hackles raised.

YOU ARE MY HEART. YOU ARE MY QUEEN. I’D DO ANYTHING YOU ASKED ME.

The boy looked down at the black stains on his hands.

“AND EVERYTHING YOU WON’T,” he sighed.

“I am the daughter of the dark between the stars. I am the thought that wakes the bastards of this world sweating in the nevernight. I am the war you–”

But fear wasn’t ever a choice.

Part of having is the fear of losing.

Part of creating is the fear of it breaking.

Part of beginning is the fear of your ending.

Fear is never a choice.

But letting it rule you is.

Pale and beautiful, she walked on.

She wore the night, gentlefriends.

And all the night came with her.

This girl who’d dared where others had failed, who had never ever seen the world the way others did.

Nor had he, really.

Goddess, how he loved her…

…that…, Mister Kindly whispered, …is for eclipse…

I shall miss it when it’s gone.

But to live in the hearts of those we leave behind is to never die. And to burn in memories of our friends is to never say goodbye.

Would I? Reread? I think I will one day. i’ll reread the whole series again. Recommend to others? Yes, I can’t stress this enough-Go read it now. Read more from this author? Of course.

Summary: The greatest games in Godsgrave’’s history have ended with the most audacious murders in the history of the Itreyan Republic.

Mia Corvere, gladiatii, escaped slave and infamous assassin, is on the run. Pursued by Blades of the Red Church and soldiers of the Luminatii legion, she may never escape the City of Bridges and Bones alive. Her mentor Mercurio is now in the clutches of her enemies. Her own family wishes her dead. And her nemesis, Consul Julius Scaeva, stands but a breath from total dominance over the Republic.

But beneath the city, a dark secret awaits. Together with her lover Ashlinn, brother Jonnen and a mysterious benefactor returned from beyond the veil of death, she must undertake a perilous journey across the Republic, seeking the final answer to the riddle of her life. Truedark approaches. Night is falling on the Republic for perhaps the final time.

Can Mia survive in a world where even daylight must die?