This is a specialty box, aside from Shelflovecrate’s monthly book boxes. This White City box did not include a book and surrounded the world of the Stalking Jack the Ripper series. Honoring the last book in the series releasing.

What was in the box 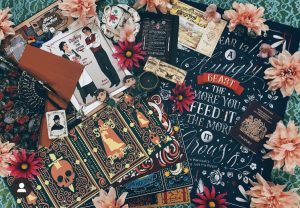 (All photos are from my own personal instagram, @Partimeavenger)

– Notebook with quote on cover

– Four sheets for the paper dolls added into the box

– Fake leather pouch to wrap up pens and such

– 4 new covers for the series

To start off, this Getaway box did not come with a copy of Capturing the Devil (the final book in the series). The book came out in September of 2019, the same time this box was to come out and be delivered to fans. But, this box continued to have problems constantly-throughout the processes. First the box was two months late. Next when i did get the box-the items were not great. I work at a printing shop, so I do have to know paper quality and inspect quality of printing. So I know how to spot mistakes. The whole new books covers were a surprise for this box, we never really get any hints about what would be in this box or by who.. The covers were not rolled up and put in any sort of tube to protect them, but curved around all the items in the box and popped right out when the box was opened (I think they were hoping for the best here, instead of trying to do a  good packing job). The paper used for these covers was very heavy and thick. You’ll only get one chance to fold them to fit them over the covers right. then I noticed a very big mistake on the printing silhouettes of Audrey Rose on the covers for book three and four. I let Shelflovecrate know and did not get a great response back from them, or any reassuring responses. I emailed them a second time to let them know that the first response back from them was not helpful in the least and let them know about my concerns (people selling and trading on the B/S/T groups for crazy money and Shelflovecrate’s habit of selling every items from exclusive boxes). I was told that they were going to be reprinting and sending them back out to people who ordered the box, weeks went by with no announcement and they did start selling the covers in their store (the mistakes were still there-huge). I reached over via social media and was told a completely different story-they don’t think its a mistake (Audrey Rose looks likes she’s caring an alien baby in her belly for the last two covers-which we know is not true). In the end they will not be reprinting or even acknowledging the mistake on their and the artists part.

The other items in the box were not great, a game of clue you can only play if you’ve read the whole series, a tea towel/tapestry that is not a tea towel fabric, paper dolls (I never would have bought these and they are not fun), a fake leather roll up pouch for pens and pencils that has a quote you cant read (really?) and the cheaply made fan.  The only items that I am keeping and  thought were good were the chess pieces of Audrey rose and Thomas, and the tea cup and it’s saucer. The rest were not my favorite, although I did like the covers and wish they hadn’t messed them up (and sadly I’m not going to be keeping them, because why would I put them on my books? I love my books and I would never put something that weird and messed up printing flaw on a book).

In other news, Shelflovecrate put all the items from this exclusive box up in their store, at a cheaper price then they were listed in the information packet about each item. Because of this box I will not be buying another Getaway box or any other type of box from Shelflovecrate again.