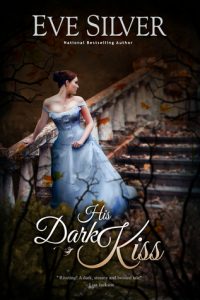 Review: I don’t have a whole lot to say for this review, the book was just okay. His Dark Kiss was pretty much the same as all of the other books in the Dark Gothic series. A frowned upon love, a doctor with a deep secret and a young woman who can’t stop herself from falling in love with him. Then, there’s the mystery and deaths surrounding the Anthony. Although, I wasn’t a huge fan of this book, it wasn’t the worst that I’ve read of this series so far and it’s not the best either. Very much middle of it all and has a good and surprising mystery of who done it. The romance was also not very inspiring or steamy, though I did like how Emma talks about Anthony’s butt.

Narrow hips. Tight buttocks that bunched with each step.

Here was the harm of one kiss. She would spend an eternity yearning for more.

Rumors of madness and murder lurk within the crumbling walls of Manorbrier Castle. But Emma Parrish is not easily put off. She accepts a position no one else dares, as governess to the son of Lord Anthony Craven, the castle’s dark master. Her presence stirs up shadows and threat. She feels unseen eyes watching her. Eerie laughter haunts her. And the seductive pull of Anthony Craven lures her.

The secrets of Anthony Craven’s shadowy past lurk behind the locked doors of the estate’s forbidden Round Tower. Mysterious lights flash there in the night. The servants whisper warnings of death. And Anthony himself warns Emma that there is only danger to be found in his sensual embrace.

EVIL IS ONLY A BREATH AWAY

Powerfully drawn to the dangerously alluring Anthony, Emma finds herself unable to deny her deepest yearnings. But even as she succumbs to the master of Manorbrier, she is touched by the whisper of evil that rises from the secrets of his past.

Note: All books in the Dark Gothic series can be read as stand-alone novels.