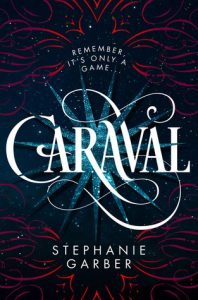 Review: Apparently when I got this book in my OwlCrate box and had no clue of what it was actually about, because if I had paid attention and know this was about a mysterious carnival I would have read it instantly. But, when I finished up with college I finally got a chance to look a bit closer at this book everyone was talking about (I had, had the book for a year at this point) and drop everything to read it (it’s also taken me over a year to write this review too, ugh I can be the worst sometimes-lol).

As I said before, I never really heard what this book was about when it came out, and I think if I did I would have read it sooner if I had- then waiting a year to. Also, when I did start reading it I had a vague notion of what it was, and then I read in the inside cover of what it was about. I was so late to the game with this book, but it worked out ( I read this in one night) and it was right when Legendary came out. I ran to the bookstore the next day and picked up the second one.

Okay, we have to talk about Scarlet. Who is by the way my top all time favorite character of this series. First off, she gets a dress, not just any dress but a dress that changes with her emotions. How cool is that?! I could also relate to Scarlett on such a deep level, I myself am a big sister and have and would still do anything to take care (protect) of my younger sister (who is also blonde/blue eyed like Tella). Also, her whole attitude was like I could give a shit about this game or anything, I just want my sister back.

Now, onto Julian. Holy cow! I was ready to set sail on the dream boat that is Julian. His and Scarlett’s whole interactions were gold. Did not like each other, but man did they have the chemistry to burn this book. Just talking about them both is making inch to grab Caraval and start rereading all over again.

Donatella (Tella), literally had me yelling at one point I hope my sister is never this stupid, and then two pages later I was yelling I hope my sister grows up and becomes this smart. Tella’s character is like a storm that comes at you all at once and leaves devastation in her wake, and wanting it to come back again. It was hard to like her in the beginning, and then before you know it-you love her too.

Another player in the game is Dante, mainly had me thinking dude, what is your game? And he seems like someone Tella would like.

And lets not forget the one, the only, Legend! Legend, who is just a big bag of mystery. I still have no clue who he is, or do I?

This book surprised me so much and also had me guessing at every turn. I had four working theories at first, and when the book took a turn they were all blown to ash along with any new characters that were introduced, new information discovered and the different clues. I kept coming up with different ideas to the many mysteries Caraval presented, but I was never right (not even a little). I LOVED IT!  I was so surprised by everything in this and I liked how surprised I was that I loved it (I didn’t think I would at first before reading it, because I was stressed with finales, I took ancient Greek, can you blame me? And I was going through a massive book slump- and then when I got a chance to read after finales this was the second book I read in a night).

I loved how the magic represented in Caraval is the type we (or at least I) haven’t seen before in anything, it really was impossible. The magic is also just the tip of more impossible magic that we will get to see in the series as a whole (as I am writing this, I have already finished all three books in the series).

This was the book that made me remember how much I loved reading mysteries when I first started reading, years and years ago. I mean, this was such a great book to start off a series and set the bar for the rest of the books in the same series (and if the author writes another new series too). I’m sorry, I just can’t get over the amazing mystery on top of mystery was.

And lastly, I’d like to leave you with the idea of an almost ending. Which is only referenced once (or maybe more) within Caraval, but you will be seeing it again soon (evil grin here please).

I think I’ve made a mistake.

Then make something better.

Not quite sure how far she’d already fallen, she imagined loving him would feel like falling in love with darkness, frightening and consuming yet utterly beautiful when the stars came out.

Would I? Reread? HELL YES! Recommend to others? I would throw this book at people if it would make them read it? YES, who says I haven’t yet.

Summary: Remember, it’s only a game…

Scarlett Dragna has never left the tiny island where she and her sister, Tella, live with their powerful, and cruel, father. Now Scarlett’s father has arranged a marriage for her, and Scarlett thinks her dreams of seeing Caraval—the faraway, once-a-year performance where the audience participates in the show—are over.

But this year, Scarlett’s long-dreamt-of invitation finally arrives. With the help of a mysterious sailor, Tella whisks Scarlett away to the show. Only, as soon as they arrive, Tella is kidnapped by Caraval’s mastermind organizer, Legend. It turns out that this season’s Caraval revolves around Tella, and whoever finds her first is the winner.

Scarlett has been told that everything that happens during Caraval is only an elaborate performance. Nevertheless she becomes enmeshed in a game of love, heartbreak, and magic. And whether Caraval is real or not, Scarlett must find Tella before the five nights of the game are over or a dangerous domino effect of consequences will be set off, and her beloved sister will disappear forever.

Welcome, welcome to Caraval…beware of getting swept too far away.