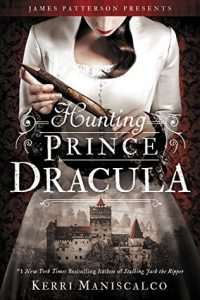 Review: Well, it seems that Thomas is still trying to kill me with all of his lines. Almost all of my favorite quotes are from him or about him, how in the world is Audrey Rose not constantly swooning every time she sees him?

Anyway, Hunting Prince Dracula picks up just a few weeks after Stalking Jack the Ripper ends. The majority of this book is seeped in Audrey Rose’s depression and Thomas trying to help her the best ways he is able to. Annoying the hell out of her and flirting so much that if he ever stops, you worry something is seriously wrong with him. Because annoyance and flirting bring that spark of fire back to Audrey’s eyes like you wouldn’t believe.

But, Kerri Maniscalco focusing on this pain and sorrow of Audrey’s instead of what most other authors would have swept over, just to continue on with the story and romance. But, instead Maniscalco has it so that everything in Audrey’s life is affected by this pain. Audrey’s overwhelming passion for medicine, cutting up dead bodies to learn their secrets. And not to leave out her new flourishing feelings developing for Thomas Cresswell, all of which are now in an almost limbo due to her sorrow and unable to see things the same as before.  We also get to see her get better, find her passion again, and be able to see a light at the end of her sorrow/pain filled tunnel.

We also get to meet Thomas’s sister, Daciana, and she is very much like Thomas in female form. Brilliant, fierce, and one who no one should mess with. Other then that we get to see Audrey get very jealous of Daciana before knowing she’s Thomas’s sister, it’s a pretty great moment folks. It also shed some light on how deep Audrey’s feeling for Thomas really are, as she had to admit to herself after this. Thomas being Thomas, could not have been prouder of himself for getting Audrey to show some fierce emotions for him other then irritation. Oh, and before I forget Daciana has some ulterior motive. Not of the bad kind, just of the female love of her’s (which was super sweet).

There were two things that came out of left field and I didn’t think should have been there in the first place, they didn’t add much to the story (well, one didn’t. The other was just out of character for Thomas). Okay, the first was Thomas being a “heir” of a sort to a bad legacy, and making him feel like he could lose Audrey’s affections because of it. And Audrey thinking he was dumb to be afraid that would/ or could change anything between them. The other thing was Thomas talking for Audrey Rose (what was that Thomas?! Huh?!), which really isn’t in his character so far. Although, I do get that he thought he was doing the right thing so that Audrey wouldn’t be put on the stop on something that brought her pain.

This wouldn’t be a full and honest review if I didn’t spare some part of this to talk about Thomas’s joke he played on Audrey Rose. A joke might I add was the WORST JOKE EVER. I really thought Audrey or myself would kill him for it, and I just can’t imagine that in any scenario that Thomas thought this would work out well for him.

Now  back to the review…

The mystery that consumes Hunting Prince Dracula, is one that I had a few theories for but apparently I was not close enough to figuring it out. I mean I would love to say I was close but I forgot that even the death speak and hold secrets of their own, and that some people are just plain crazy.

The romance between Audrey Rose and Thomas is well, lets say intense and taken up a couple notches. If I wasn’t already in love with Audrey and Thomas, I’m all in now and squealed a few times reading some of their moments. On that end, Audrey Rose turned up her fierceness and holy cow! All bow to The Audrey Rose and her know wit and banter.

I cannot wait to read the third installment to Audrey Rose and Thomas’s story in Escaping from Houdini and being ready to jump right into Capturing the Devil later this month.

Try not to miss me too much, Wadsworth. though that might be an impossible task. I, for one, miss myself terribly when asleep.

“You know , I much preferred you when  you weren’t speaking.”

Daydreaming of a new scalpel, or is it that look simply to enrapture me?

You would miss me terribly and know it. Just as I would miss you in ways I cannot fathom, should we ever part.

Passion and annoyance were fire, and fire was alive and crackling with power. Fire breathed. Grief was a vat of quicksand; the more one struggled against it, the deeper it pulled one under. I’d much rather be set ablaze than buried alive.

You’re saying you’d like to trap me and hang my severed head above the mantle, then? That’s so utterly romantic. Do tell me more.

Right now he was every bit the villain with a hero’s face.

Hearts were beautifully fierce yet fragile things. And I did not wish to break Thomas’s.

Curiosity was a disease that plagued me, and I’d yet to find a cure.

“You must be the handsome traveling companion.”

“With Audrey Rose, I like thinking of myself more along the lines of ‘handsome life companion.'”

“I am not inferior, Thomas. No person is.”

Depends on what I’m guilty of . Dirty thoughts or wanton follies, I’d send myself straight to your quarters to be punished.

You’re dressed for sneaking about Dracula’s castle. Be still my thawing, dark heart. You certainly know how to make a young man feel alive, Wadsworth.

If we weren’t about to face another terrible passageway filled with life-threatening danger, I’d take you in my arms this instant.

His eyes were my favorite constellations to gaze at; each fleck of gold surrounding his pupils were new galaxies begging to be discovered. I’d never been fascinated by astronomy before, but now found myself an eager student.

“I’ve already fallen hard, Wadsworth. Perhaps you should have warned me sooner.”

As to the stars? Those are what I prefer. More than medical practices and deductions. The universe is vast. A mathematical equation even I have no hope of solving. For there are no limits to the stars; their numbers are infinite. Which is precisely why I measured my love for you by them. An amount too boundless to count.

Would I? Reread? Yes, if I reread the whole series again (which I would). Read more of this series? Try and stop me! Read more from this author? Yes! Recommend to others? I already do so much.

Summary: In this New York Times bestselling sequel to Kerri Maniscalco’s haunting #1 debut Stalking Jack the Ripper, bizarre murders are discovered in the castle of Prince Vlad the Impaler, otherwise known as Dracula. Could it be a copycat killer…or has the depraved prince been brought back to life?

Following the grief and horror of her discovery of Jack the Ripper’s true identity, Audrey Rose Wadsworth has no choice but to flee London and its memories. Together with the arrogant yet charming Thomas Cresswell, she journeys to the dark heart of Romania, home to one of Europe’s best schools of forensic medicine…and to another notorious killer, Vlad the Impaler, whose thirst for blood became legend.

But her life’s dream is soon tainted by blood-soaked discoveries in the halls of the school’s forbidding castle, and Audrey Rose is compelled to investigate the strangely familiar murders. What she finds brings all her terrifying fears to life once again.