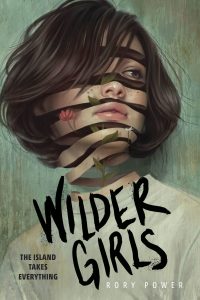 Review: The premises of Wilder Girls interested me and I was happy to pick it up at ALAMW19, I’ve also heard a lot of really high anticipation for it too. Although, this was very hard to get into I ended up stopping twice when I first picked it up. In the end though, I did finally finish reading  because I had to know what the heck was going on in the story. Basically in the end I was very much and still am thinking  “Holy shit! Not at all what I was expecting.”

This is very much a somewhat similar version, with girls, years, and paranormal aspect added to a story that’s like Lord of the Flies. But really, nothing is as it seems and you’ll mostly be surprised by whats happening underneath everything.

I wasn’t expecting so much graphic and horror, although that’s my fault for not looking up more about this book before reading. Although, this did not take away from the story, gore wise, but added the element of fear and wanting to know what the hell this was all about.

The relationships within Wilder Girls was nice, the friendship was very strong among our three main girls that we see that the story/plot revolves around. We also see how fast others turn against each other, and how even friends because strength and power is how one stays in control of a situation (and alpha basically among the others so they are not messed with). There is also a budding romance that we see start to grow, with a tiny bit of confusion added to it, and not knowing anything else. But, basically the romance is a nice touch, it’s also LGBTQ, and very light and does not take away from the plot.

A word of warning to those who have yet to read Wilder Girls and a those who have read it, I do not think that we will ever know the conclusion to that cliff hanger-ish we get. I still have so many questions with not enough answers.

Reese’s braid scatters the water like stars, beautiful and hard to look at

Reese with her starlit hair and her wildfire heart.

Here is Boston in my hand, spilling between my fingers. Brick and stone and a handful of streets eating their own tails. I walk and walk and lose my way and always come back.

Because I think I’d been looking for it all my life- a storm in my body to match the one in my head.

Byatt was the one who put the bones in my body.

(Roaring a roaring a rush it is coming)

I will keep it anyway

Would I? Reread? Maybe. Read more from this author? Yes. Recommend to others? Yes, I’m sending my ARC to a friend. Read a companion novel to Wilder Girls? Yes.

Summary: It’s been eighteen months since the Raxter School for Girls was put under quarantine. Since the Tox hit and pulled Hetty’s life out from under her.

It started slow. First the teachers died one by one. Then it began to infect the students, turning their bodies strange and foreign. Now, cut off from the rest of the world and left to fend for themselves on their island home, the girls don’t dare wander outside the school’s fence, where the Tox has made the woods wild and dangerous. They wait for the cure they were promised as the Tox seeps into everything.

But when Byatt goes missing, Hetty will do anything to find her, even if it means breaking quarantine and braving the horrors that lie beyond the fence. And when she does, Hetty learns that there’s more to their story, to their life at Raxter, than she could have ever thought true.