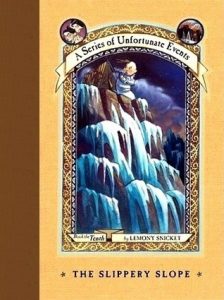 Review: I haven’t been motivated lately to finish up the last four (now three) books to SOUE’s ,but  since watching season three (the last season and on Netflix).And I know I should have read the last of of the series before watching the last season of the TV show, but I couldn’t stop myself. It was so GOOD! But more on that later (I’ll do a separate post about the series as a whole and the TV show. Anyway, in this book we find out what VFD is and a couple of other clues- but other then that and romance the story is gearing up for The End.

Jacques wouldn’t tell me, Quigley said, but I think the letters stand for Volunteer Fire Department.

Both sides are using the same codes, and disguises. Even the V.F.D., insignia used to represent the noble ideals everyone shared, but now it’s all gone up in smoke.

As they looked at the villainous thing they had made, the three villains, too, and this was the least pleasant feeling in the world.

Although if you have to hide a headquarters, it’s a beautiful place to do it. Aside from the remains of the fire, this is a very lovely indeed, Quigley said, but he was not looking at the view beneath him. He was looking beside him, where Violet Baudelaire was sitting.

Would I? Reread? I don’t think so. Recommend to others? Yes, if they want to read the series as a whole. Read more of this series? Yes, I need answers!

Like handshakes, house pets, or raw carrots, many things are preferable when not slippery. Unfortunately, in this miserable volume, I am afraid that Violet, Klaus, and Sunny Baudelaire run into more than their fair share of slipperiness during their harrowing journey up–and down–a range of strange and distressing mountains.

In order to spare you any further repulsion, it would be best not to mention any of the unpleasant details of this story, particularly a secret message, a toboggan, a deceitful map, a swarm of snow gnats, a scheming villain, a troupe of organized youngsters, a covered casserole dish, and a surprising survivor of a terrible fire.

Unfortunately, I have dedicated my life to researching and recording the sad tale of the Baudelaire orphans. There is no reason for you to dedicate your-self to such things, and you might instead dedicate yourself to letting this slippery book slip from your hands into a nearby trash receptacle, or deep pit.

With all due respect,