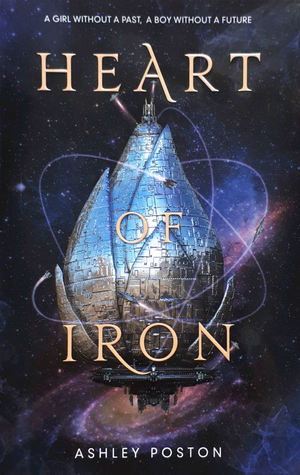 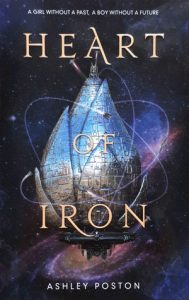 Review: I was really worried about this book, I love Poston… But, Geekerella was not one of my favorites or even  all that much liked. But I was blown out of the water by Heart of Iron! Within the first few point of views, I was enthralled with the plot! I am also a little in love with the characters, or better known as our heroes-Ana, Do9 (DI), Ax, and Robb. It wasn’t at first read, but by the end of the first section I was craving to know all about them. And to match the characters with the character poster that was included in the OwlCrate edition.

Although the plot pace was fast and you start off running. The writing style is super nice and easy to read and to keep up with everything going on.

The romance was so good, it didn’t overshadow the characters or the plot. But helped to break any mold set for them (and keep them different from the common tropes). Though this romance had me very interested and now invested. I’m chopping  at the bit to know whats going to happen next!

I promise you on iron and stars.

Stars are not afraid. Screw the stars-he was terrified.

She was always one to leap first, ask questions later. She never looked back. He hoped she never would.

He would miss her more than iron and stars.

And her heart beat on in a universe without him, a sad and useless organ in her chest.

The kiss lit a million suns in between his zeroes and ones, and made him infinite.

Because I will follow you anywhere, he insisted. To the ends of the galaxy, if I have to. I want to exist where you exist, and that is enough.

But I assure you, he said, turning her hand back over, I am ninety-nine-point-nine-eight percent me.

How about that  point-oh-two percent?

Everyone needs a little mystery and he smiled.

If Metals had hearts, his would have broken, for he had promised, too.

Screw fate. I’ll tear down the stars for you.

She was a girl born in fire and raised in the stars, and she would burn against the darkness-and drive it away.

Would I? Reread? Maybe. Read more of this series? Yes, I need to know what happens next! Tell others to read? Yes.

Summary: Seventeen-year-old Ana is a scoundrel by nurture and an outlaw by nature. Found as a child drifting through space with a sentient android called D09, Ana was saved by a fearsome space captain and the grizzled crew she now calls family. But D09—one of the last remaining illegal Metals—has been glitching, and Ana will stop at nothing to find a way to fix him.

Ana’s desperate effort to save D09 leads her on a quest to steal the coordinates to a lost ship that could offer all the answers. But at the last moment, a spoiled Ironblood boy beats Ana to her prize. He has his own reasons for taking the coordinates, and he doesn’t care what he’ll sacrifice to keep them.

When everything goes wrong, she and the Ironblood end up as fugitives on the run. Now their entire kingdom is after them—and the coordinates—and not everyone wants them captured alive.

What they find in a lost corner of the universe will change all their lives—and unearth dangerous secrets. But when a darkness from Ana’s past returns, she must face an impossible choice: does she protect a kingdom that wants her dead or save the Metal boy she loves?