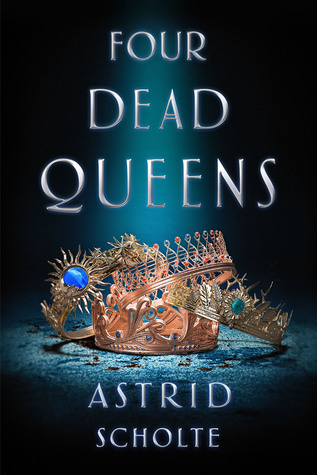 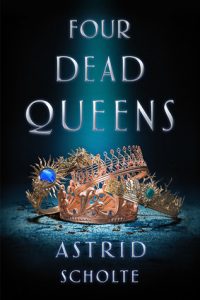 Review: I think this is one of the most hyped books of 2019, and I am so happy to have been able to pick it up a little early from ALAMW19. Anyway, I am writing this review hours after I have finished Four Dead Queens, it took me about two days to read this through. Though this was a very slow to start beginning, I had started reading it about a week ago when I finished Warrior of the Wild and could not get past chapter two. I was a bit distracted by King of Scars and The Wicked king (both of which I have started but have not gotten far, I’m a little overwhelmed in choosing what to read next). But, for the last five day (hopefully not still by the time this is posted later this week) I have been snowed in. And I’m talking crazy amounts of snow, I think in my area we have about two feet and it keeps snowing. In February. We don’t really get snow here a lot, we get rain and maybe a flaking of snow for like an hour.

Anyway, I have had the time to focus on Four Dead Queens, and it totally deserves it. The timeline and pacing of the book were some of my favorite, there were no indications about the timeline of the story in the titles of chapters only the P.O.V’s. But the passage of time is mentioned in part three and everything makes sense (it clicks, k?), but before part three it is not confusing in the least. I would explain more, but its more then a bit spoiler-y about everything and I would hate to ruin the experience and shock for anyone.

What had me hooked-the mystery. I have been a big sucker for a good mystery and trying to figure out who done it. And Four Dead Queens has it all, including a twist that’s not obvious but has you going “gasp” that’s not what I thought the twist would be.

The society in which Queens is set is interesting and leaves you wanting to know more about the history of the first four queens and the future that will follow the ending of the book.

The queens themselves I had to make notes so I could track of them and their information that I knew, I was trying to solve the mystery first and who the intend victim was. Every queen has their secrets that could cause their deaths and crown…

Queen Iris- Queen of Archia, no tech in her section everything must be made by hand. Second oldest of the queens (I think…), wanted to make changes to queenly law and knew many secrets and having many too. Also very hard headed and outspoken with her opinions, lets just say you find out how mad she is at one point early in the book.

Queen Stessa- Queen of Ludia, the artistic section of the queen-dom, full of artists and entertainment. She is also the youngest of the queens, with a bit of a darker side…

Queen Corra- Queen of Eonia, the section with technology, people forced to have no emotions and every person has a death date. A date they are given when born (also not raised by parents, cause no marriage or love. Children are sent to schools to be raised and tested to see what job they should be in. Very Greek way of thinking, this is a idealistic view point from Plato, or at least very similar) to find out when their health is no more beneficial to their society.

Queen Marguerite- Queen of Toria, and eldest of the current four queens and most likely the nicest and un-vainest of the bunch (except for queen Corra, they’re on the same level of nice).

The queen’s point of views for some chapters is a good addition to the story and helped me when compiling information about them and their secrets (and of course a bit closer to finding the killer).

Now on to Keralie, who is from the slums  (Jetee) of Torian and under Queen Marguerite’s rule. Keralie is also a theif, and of course a criminal. Although she show extreme guilt for the truly important faults that she has, but no not stealing or lying.  Keralie herself also falls under the angry girl genre of new, and you can’t help but watch as she fights her many battles against herself and others.

The boy and/ or romance, Varin who is from the section of Eonia (age 18), and does not feel. Or at least he is not suppose to… I liked that Varin was a good companion to Keralie and her story (along with the queens, because duh Four Dead Queens). Again, this is another character and romance side plot that is not the focus of the story of main character but a nice side affect of everything.

Holy cow! I can’t believe I had so many notes for this book, and I’m not even done with this review yet. Okay, here’s the last. The added good of Four Dead Queens is that it is another stand alone fantasy young adult novel. Literally the best, and no waiting to find out what happens next to and for our characters.

She had done it out of love. And love was a powerful thing. But as Marguerite knew, it could also be terribly painful.

Loving someone means risking your heart being broken, Cora said. But those moments you are together triumphs over any darkness.

Would I? Reread? Yes, I need the finished copy! Recommend to others? Of course.

Edition: I received this book as an ARC at ALAMW19 from Penguin Random House imprint Penguin Teen, in return for an honest and true review. Hardcover, 432 pages

A divided nation. Four Queens. A ruthless pickpocket. A noble messenger. And the murders that unite them.
​
Get in quick, get out quicker.

These are the words Keralie Corrington lives by as the preeminent dipper in the Concord, the central area uniting the four quadrants of Quadara. She steals under the guidance of her mentor Mackiel, who runs a black market selling their bounty to buyers desperate for what they can’t get in their own quarter. For in the nation of Quadara, each quarter is strictly divided from the other. Four queens rule together, one from each region:

When Keralie intercepts a comm disk coming from the House of Concord, what seems like a standard job goes horribly wrong. Upon watching the comm disks, Keralie sees all four queens murdered in four brutal ways. Hoping that discovering the intended recipient will reveal the culprit – information that is bound to be valuable bartering material with the palace – Keralie teams up with Varin Bollt, the Eonist messenger she stole from, to complete Varin’s original job and see where it takes them.