Before She Ignites (Fallen Isles #1) by Jodi Meadows 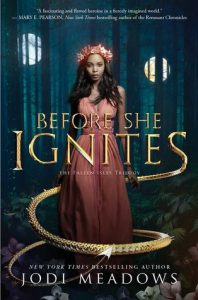 Review: I got this book awhile back in one of my OwlCrate boxes, but started reading it when I was waiting to pick up a friend from the train station. I was intrigued by the synopsis of the book, the hype, and the overall cover of the book. But, getting into the book was hard, I was in solitary in my car with only this book for over an hour waiting for my friend’s train (I’m not complaining, it got me away from campus and homework). My goodness it was hard to stay in the book, I ended up starting and finishing two other books before I sat back down to push myself to finish this book.

My biggest problem with this book was the main character, Mira Minkoba, who kept saying she was going to do something but never follows through on really anything she promises and instead whines. Along with this, there is the issue with the timeline in the book, which  was not fun to read and could have just did flash backs. But instead, the book was written as a back and forth between before her imprisonment and while she was imprisoned and not entirely in order. This caused the book to be more confusing then it needed to be and took away from the point of the book and overall likability.

Only the last handful of chapters were the most interesting , and had me wanting to know what happens in the next volume and hopping to figure out what the heck is going on. The main reason for this were the dragons, who do not show up till the last moment of the book. Overall, this kinda sucked. I was super excited for the dragon element of the story plot, but was really let down in that regard.

I do want to know what happens next, and even though the second book is out now I don’t think I will be picking up the book to find out more.

Would I? Reread this book? No. Read the next installment of the series? Pretty sure no.

Mira Minkoba is the Hopebearer. Since the day she was born, she’s been told she’s special. Important. Perfect. She’s known across the Fallen Isles not just for her beauty, but for the Mira Treaty named after her, a peace agreement which united the seven islands against their enemies on the mainland.

But Mira has never felt as perfect as everyone says. She counts compulsively. She struggles with crippling anxiety. And she’s far too interested in dragons for a girl of her station.

Then Mira discovers an explosive secret that challenges everything she and the Treaty stand for. Betrayed by the very people she spent her life serving, Mira is sentenced to the Pit–the deadliest prison in the Fallen Isles. There, a cruel guard would do anything to discover the secret she would die to protect.

No longer beholden to those who betrayed her, Mira must learn to survive on her own and unearth the dark truths about the Fallen Isles–and herself–before her very world begins to collapse.