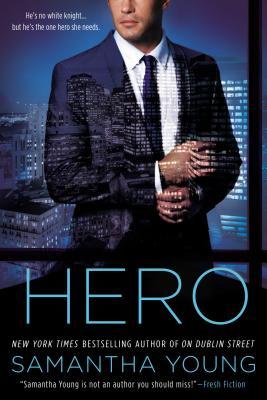 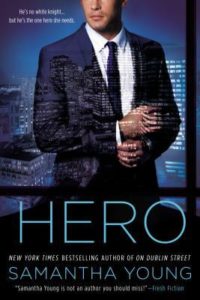 Review: I would like to start off saying I love Samantha Young, I mean the On Dublin Street series. I die every time I look at those books, they are just so great.

So when I got the chance to meet Young and get her to sign ALL my books, I jumped at the chance at buying this one and getting it signed too. Not that I’m not super crazy grateful she did this…. But during and after reading Hero, it felt like such a let down. I mean there was nothing to make me love or care all that much for the characters.

Although I was happy for them at the end of the book, nothing about them or their story really stood out or had my heart.

Even now months later, I still feel a bit wishy-washy about my feeling for this book. I mean it was ok, not dreadful or anything. But it was also not anything to jump up and down about…..

Favorite Quote: I didn’t really have a favorite quote of line from this book that I really loved or liked.

Summary: The emotional and unforgettable new romance from the New York Times bestselling author of the On Dublin Street series.

Alexa Holland’s father was her hero—until her shocking discovery that her mother and she weren’t his only family. Ever since, Alexa has worked to turn her life in a different direction and forge her own identity outside of his terrible secrets. But when she meets a man who’s as damaged by her father’s mistakes as she is, Alexa must help him.

Caine Carraway wants nothing to do with Alexa’s efforts at redemption, but it’s not so easy to push her away. Determined to make her hate him, he brings her to the edge of her patience and waits for her to walk away. But his actions only draw them together and, despite the odds, they begin an intense and explosive affair.

Only Caine knows he can never be the white knight that Alexa has always longed for. And when they’re on the precipice of danger, he finds he’ll do anything to protect either one of them from being hurt again….