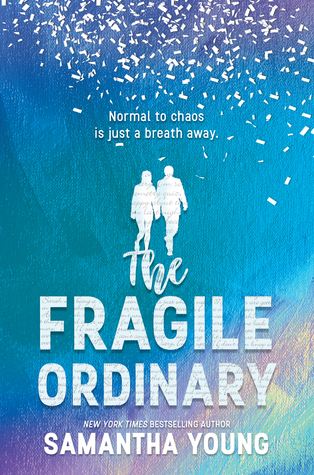 The Fragile Ordinary by Samantha Young 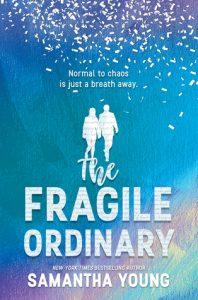 Review: I was really excited to read this, but it was a bit of a slow start and took me a while to get into the story. But once I did, I got really into it. I thought the main character Comet was very well developed, she showed great depth and changed as a person as the story plot progressed. This is a big thing to me when reading because I like to see the main character grow with the story, especially when their identities expand and change (as the person themselves grow). Comet’s family dynamic was on I have not read or seen before, with her parents not sparring much thought to her. Almost as if she did not matter or was there at all. Although this was great in the story plot and added more to who Comet was, I can’t help but also see it as an easy way out for the author to do what she needs to with Comet (parents not caring= no rules or restrictions for Comet). I also really love Comet’s name, but back to the review…

What I loved and liked- If you haven’t seen my favorite quotes part yet, what I loved was Comet’s poetry. It really showed her deeper feelings in certain moments (problems with parents, fear of getting out of her shell, friends, love interest), but it also made me a bit emotional. Okay, I got choked up and totally related to her poems, I LOVED THEM. Um, can I just get a book of her poetry please! Moving on to what I liked was Comet and Tobias’s relationship, although its a bit rocky at first and had me cranky for the first half of the book. I really liked them together because I though  that they had a good way dealing with their challenging past and present. They just were healthy when dealing with challenges they had to face as a couple.

All except for one instance… which leads me to what I did not like. There is something big that happens toward the end of the novel (I will not spoil it!) , and Tobias does not handle it in a good way. I do understand his feelings but I just really thought he was dumb the whole time for being an ass, and even though he kind of gets through it? I did not like him again in the novel and could care less about him (maybe I’m just stone cold, or just too old for teenage drama…). The other thing that I did not like, but really let me down was the lackluster ending to the novel. I’ve read many of Samantha Young’s novel (young adult and new adult) and there is always sweet punch in the gut feeling I get after reading a novel (although it was missing in her other YA novel too). Though the ending to The Fragile Ordinary wasn’t really noteworthy, it was still cute.

Favorite quote: I had a whole bunch that I really loved!

Shakespeare said it best, To thine own self be true.

To his wisdom, I attest,

For the longest, loneliest time, I thought it was me, not you. So I tried to see it in rhyme, Work out what was real and true.

For years there have been secrets, Hidden in those distant eyes. Truths that are your weakness because you want to keep them lies.

It doesn’t make me feel better, knowing you’re so messed up. I thought it would  free me of your fetters, but here I am still locked up.

some would say I need empathy, for the pain you’ve had to endure. but for you I’ve run out of sympathy, you’re my villain… and there is no cure.

They say it dies last.

There’s a cruelty in its stubbornness. Hope,

I hope it dies fast.

Or it could be the end of us.-CC

Once there was a cold man in a dark hole,

And he offered a boy a choice.

I’ll destroy your pain in exchange for your soul,

Or live your days down here with no voice.-CC

Time to tell that star goodbye,

too much wishing blew its spark.

Watch it disappear into the dark.-CC

Today I was a bird, the sky my vast stage. Free not just a word,

As I left behind my cage.-CC

Sometimes being happy meant being brave. I aimed to be brave every second of everyday.

Would I? Reread? Maybe, I think. Tell others to read? Yes. Buy a hard-copy for myself? Yes.

Edition: Kindle Edition, 304 pages. I received this ARC in return for an honest review.

Summary: I am Comet Caldwell.

And I sort of, kind of, absolutely hate my name.

People expect extraordinary things from a girl named Comet. That she’ll be effortlessly cool and light up a room the way a comet blazes across the sky.

But from the shyness that makes her book-character friends more appealing than real people to the parents whose indifference hurts more than an open wound, Comet has never wanted to be the center of attention. She can’t wait to graduate from her high school in Edinburgh, Scotland, where the only place she ever feels truly herself is on her anonymous poetry blog. But surely that will change once she leaves to attend university somewhere far, far away.

When new student Tobias King blazes in from America and shakes up the school, Comet thinks she’s got the bad boy figured out. Until they’re thrown together for a class assignment and begin to form an unlikely connection. Everything shifts in Comet’s ordinary world. Tobias has a dark past and runs with a tough crowd—and none of them are happy about his interest in Comet. Targeted by bullies and thrown into the spotlight, Comet and Tobias can go their separate ways…or take a risk on something extraordinary.