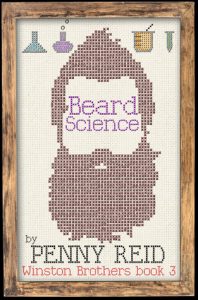 Review: Right after I read the first book in this series, and saw that Cletus had his own book. I just skipped the second book and jumped right into this one.

I’m pretty sure this is my favorite book in the whole series so far (and I have read all four now). I mean I went to this book for Cletus but stayed and came back again for Jennifer. Wholly cow am I happy for Cletus (and he’s supper lucky) to find someone like Jennifer.

The Banter, enemies to friends, and then to so much more. These two were just the best. At first when I started reading I had no clue how theses two characters would end up together or even be anywhere near each other. But oh my gosh I loved this so much!!!!! I still can’t even.

Anyway, the relationship between the two had a great pace and really grew. I also really liked reading their thought process and all the other messes their were thinking about (or making in Cletus’s case).

I do think the only thing that came up again in this book, as it did for the others, was the real lack of sex. Reid does a great job of building the heat, like it was boiling in this book, but the lack of follow through put me off. I know and understand that sex does not make or break a book, that it’s not needed, but I was really hopping for more of the sexy times for Cletus and Jennifer. Mostly because of all the different things Cletus was dreaming up about doing. But sadly lack of sexy times and lack of any real detail really kind of bummed me out.

Would I? Reread this book again? Heck yeah, I am right now. Recommend it to others? YES! Treasure for the rest of my life? YES, YES and YES!!!!

Summary: Make a deal with the devil and you might get what you want, but will it be what you need?

Jennifer Sylvester wants one thing, and that one thing is NOT to be Tennessee’s reigning Banana Cake Queen. Ever the perpetual good girl and obedient daughter, Jennifer is buckling under the weight of her social media celebrity, her mother’s ambitions, and her father’s puritanical mandates. Jennifer is officially desperate.

Cletus Winston is a puzzle wrapped in a mystery covered in conundrum sauce, and now he’s in a pickle. Despite being convinced of his own omniscience, extortion by the exalted Banana Cake Queen of Green Valley has taken him completely by surprise. So… what’s a maniacal mastermind to do?

Likely, the last thing you expect.