If There’s No Tomorrow by Jennifer L. Armentrout 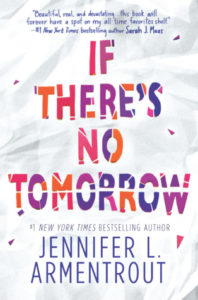 Review: Well as most of you know I am a huge fan of anything by Jennifer L. Armentrout, she could write a shopping list and I would want to read it. But If There’s No Tomorrow, did not reach my expectations nor gave me that punch in the gut feeling that Armentrout writing normally gives me. Although the story plot of only one teenager making it through alive (only one out of four) after a horrific car accident, and having to deal with should’a, could’a, would’a.

The main part of the story that I found the most interesting was Lene learning to deal with what happened, getting over the loss and rejoining society again. I just found the struggles she was going through to be so realistic and very driven (in wanting to get better and not wanting to be happy while the others were dead).

I think the only thing I didn’t really like was the the characters, while showing deep signs of loss, grieving, and finding closure. They did not have that much depth to them, and did not dig deeper into the relationships between friends (a main theme in the book, but only slightly touched on). And other then Lene being in the accident and the thought and stages of grief she was going through, she was not all that likable as a  main character. She also seemed a bit shallow before the accident, and only grew more interesting after it (I know that sounds terrible but that’s how I felt).

Summary: A single choice can change everything.

Lena Wise is always looking forward to tomorrow, especially at the start of her senior year. She’s ready to pack in as much friend time as possible, to finish college applications, and to maybe let her childhood best friend Sebastian know how she really feels about him. For Lena, the upcoming year is going to be epic—one of opportunities and chances.

Until one choice, one moment, destroys everything.

Now Lena isn’t looking forward to tomorrow. Not when friend time may never be the same. Not when college applications feel all but impossible. Not when Sebastian might never forgive her for what happened.

For what she let happen.