The Alchemists of Loom (Loom Saga #1) by Elise Kova 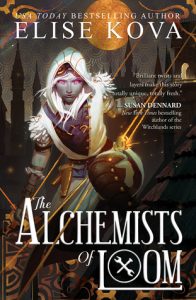 Review: I am a huge fan of the Air Awakes series and knew when I heard about this book that it would be a favorite too.

The super high fantasy mixed in with steampunk really pulled me into this book. Although there were times that I was a bit confused, but I just went back to reread over the last couple of pages to make sure that I got it. Those rereads did me a lot of good because this book does move at a faster pace, in a good way. Because as you read you are moving at the same speed as the characters as they are on the run (so to speak). There were also a lot of viewpoints in the book that switched around a lot too.

The action was very much packed into this first book (guys, dragon people!), but I think it was needed to set the tone of the series and the plot line (to catch readers up with it). But the great parts of the book was the diversity (hinted at in the end) and the little bit of romance (again mostly just at the end), were some of the great parts of this book. I really liked how there wasn’t romance that was overwhelming to the plot or characters, and was just sprinkled in at the end. Although I’m not sure what that means for the up coming books in the series, I am looking forward to seeing how it goes.

Would I? Do a reread? Yes, I need to before I read the next two books. Tell others to read this book? Yes, it’s super intense and good.

Her vengeance. His vision.

Ari lost everything she once loved when the Five Guilds’ resistance fell to the Dragon King. Now, she uses her unparalleled gift for clockwork machinery in tandem with notoriously unscrupulous morals to contribute to a thriving underground organ market. There isn’t a place on Loom that is secure from the engineer turned thief, and her magical talents are sold to the highest bidder as long as the job defies their Dragon oppressors.

Cvareh would do anything to see his sister usurp the Dragon King and sit on the throne. His family’s house has endured the shame of being the lowest rung in the Dragons’ society for far too long. The Alchemist Guild, down on Loom, may just hold the key to putting his kin in power, if Cvareh can get to them before the Dragon King’s assassins.

He offers her the one thing Ari can’t refuse: A wish of her greatest desire, if she brings him to the Alchemists of Loom.