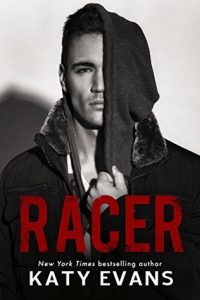 Review: I have been dying for this book ever since I’ve heard about it’s title. I mean come on guys, Racer?! That title already tells me everything I need to know.

Getting sucked into this book took no time at all, and I had so much fun racing through it (haha, I couldn’t resist).

I did love seeing everyone from the past books and how they were doing, although there were some key characters left out.  Such as Melanie and Greyson King, I people! We have got to know who these two are doing! If you’re going to add in the characters from the past six books, you have to have these two as well. I mean, I really want to know if Melanie had twins or not. Or if Maverick and Reese got married and had kids too. Not that they have to or anything, but I would just like to know more. I love all these characters from all seven books, so sue me, I want to know how everyone’s doing.

There were a couple of parts that made the book difficult to read, not that they were bad or anything but because it felt like the book didn’t have the same depth as the previous six. The first thing I had an issue with was the lack of Racer’s bipolar-ness had in the story plot and in his character. Like yeah, it was there, but it wasn’t as much as part of him or the story as it had been for his dad. It just felt like, hey we’ll mention it a couple of times and then do like maybe two to three chapters with it and then everything is fine.

The second thing I had an issue with was that things would happen-like he took off her pants or something and then it would be a little while later in the same scene and he would take off her pants again or she would take off her own pants. it seemed to me that there might have been an editing error in the book, because things like this kept happen in the print edition of the book.

The only other thing I guess I would talk about is the sister, that’s right Iris. I fell like from the little we got of her in this book we might be seeing her with her own book in the future. Now the only reason I’m saying this is because she was all about how love and marriage is dumb and she didn’t want any part of it. But with Remy and Brooke as her parents how can she not believe in love, especially the love that seems to hit the Tate men (and Brooke) as soon as they see the person who they are going to end up with. This is the only reason behind my mind thinking about Iris getting her own book. I do think it would be very interesting because of her protective father and brother (and lets face it mom).

Favorite quote: This had me crying so hard…

“You make me proud, you know? You make proud. If I did nothing right in this damned life, the day I die, I’ll die happy, because you and your sister? Me and your mom did you right”.

Would I? Reread? I think so, if I did a whole series reread. But I don’t think this will be like the other books in the series to me. Because I reread those ones a lot and I think rereading this one will only be when I reread the whole series.

Summary: A bad boy with something to prove.
A woman with a mission.
The race of their lives.
The love of a lifetime.

I don’t think his parents expected him to live up to his name—Racer Tate—but once he felt the adrenaline rush behind the wheel, he was addicted.

He’s the fastest, fiercest driver around.

Scouting new talent brings me to his doorstep…
but his smile sends me to my knees.

The sexy, mysterious Racer Tate is not the kind of man a girl like me falls for. He’s secretive, reckless, elusive. But his proximity pushes me beyond reason, and his kiss….

This is our last chance to win, and he is our only hope. I’m supposed to watch him—make sure he doesn’t get into trouble. But it’s an impossible task. And now the one in heart wrenching, toe-curling, soul-crushing trouble is me. Because when your heart belongs to someone, their truths become your own, and their secrets become your salvation…or your curse.

He says he wants me. He says I’m the One. But he also thinks he’ll break my heart, one piece at a time until it’s gone.