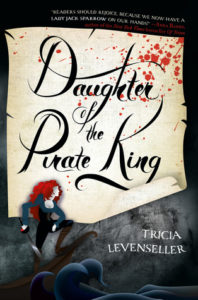 Review: As soon as I opened my Owlcrate and saw this book, I guess I was too curious to put it down. By the next morning I had finished the book and actually enjoyed it a lot more then I thought I would, now I just can’t wait to get my hands on the second (and I think final) book of the series to see what happens next.

One the author is very descriptive throughout the novel and is really good at talking about everything that is going on. All but Alosa going to the bathroom, although there are lots of details about the ships, people, even her changing her outfit and her hiding places- or even eating. But there was nothing about her going to the bathroom on the ship. I don’t need a super detailed section about it, but just a mention would have brought the story to a little bit more a covering of all bases.

The second thing that got to me was the secret Alosa is hiding, now I can’t go into detail about it because it would spoil the main part, if not huge part of the book. But there were a couple of times when Alosa was doing her inner point of view(that as readers that’s all we read-mostly). But the thing is that she was like “oh I wonder why that happens”to later in the book where the secret is revealed to like “yup”. I mean she didn’t seem to know why something of herself was at one point to at the end of the book acting and seeming to know all the ins and out of herself that she already knew.

Anyway that’s just me, hopefully the next book will be even better with surprise that Alosa actually already knows.

Oh and p.s – One of the better things in the book was how low key the romance was to the actual story. I really liked that it didn’t dominate the story line or Alosa as the main character.

Favorite Quote: I can’t think of one at this moment so I’m going to pass.

Would I? Recommend this book to others? Yes. Do a reread? I don’t think so.

Summary: There will be plenty of time for me to beat him soundly once I’ve gotten what I came for.

Sent on a mission to retrieve an ancient hidden map—the key to a legendary treasure trove—seventeen-year-old pirate captain Alosa deliberately allows herself to be captured by her enemies, giving her the perfect opportunity to search their ship.

More than a match for the ruthless pirate crew, Alosa has only one thing standing between her and the map: her captor, the unexpectedly clever and unfairly attractive first mate, Riden. But not to worry, for Alosa has a few tricks up her sleeve, and no lone pirate can stop the Daughter of the Pirate King.