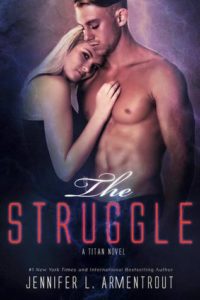 Review: I’m a big ball of mush after finishing this book an hour ago. My feelings are all over the place and I need the next book, which is also the last book of the series, right NOW!!!!

Anyway, The Struggle picks up right after The Power and never really slows down all that much. We get to see the whole gang again and get to see what the heck is going on with Seth. I mean having Seth time is great, because its well Seth. And him and Josie are the most freaking beautiful couple to me that I ship with all my heart.

Back to the book, So we get to see what’s happening with Seth, but we also get to see a darker side to the Titan series. One I’ve not really seen in many of Armentrout’s books, but it does add more to the series. But with this new added darkness to The Struggle, it brings about a more serious tone to Seth and Josie’s relationship. Which I can’t wait to see played out in the final book next year.

Favorite quote: Sadly I can’t tell you guys my favorite quote because I would spoil the whole book.

Would I? Marry this book? YES! Tell everyone to read this series/book? YES, YES, and YES!!!

Summary: A bloody path has been chosen…

The war against the Titans continues, and they remain determined to wreak havoc on the world, but Seth has become something all gods fear. Now the most dangerous, most absolute power no longer resides in those who have been freed from their tombs.

The Great War fought by the few is coming…

All may doubt and fear what Seth has become. All except the one woman who might be his final chance at redemption. Josie will do anything to prove that Seth is on their side, but fate has a nasty way of changing lives, of changing people.

In the end, the sun will fall…

The only way they can save the future and save themselves is by facing the unknown together. It will take more than trust and faith. It will take love and the kind of strength not easily broken. No matter what, their lives will never be the same.

For what the gods have feared has come to pass. The end of the old is here and the beginning of the new has been ushered in…