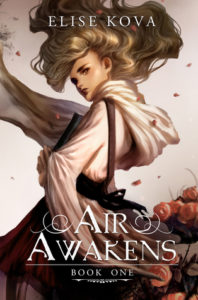 Review: I have heard so much about this book and seen so many great Instagram phots of it, that for my B-Day I bought the first book.

First off the cover is so freaking beautiful!!!!! I love it!

It only took me about four hours to read this book in one sitting, I was that much in love with this book!  Vhalla and Aldrick are my favorites for this series, just the chemistry between them and the friendship was so great to read.  Their wit and banter back and forth was so entertaining, it always put a smile on my face.

it was also interesting to read from Vhalla’s point of view on not wanting to have any kind of magic because of how she (and many others were raised without magic). I thought that her insight added so much to her own character and to a lot of the side characters without magic (because it explained their fear).

Just reading this book made me feel like I was on a book high or like I was flying on the feels. This first book to the Air Awakens series is a great start to an amazing series. It sets the in motion the things that will come later on and leaves little hints on what might happen and also who to trust. Overall the book was so full of information, amazing characters (even if they were hot and cold a lot), and just some great descriptions of the places that the book takes place.

Right after finishing this book I book the rest of the series! I cant wait to share my reviews of them with you!!!

Favorite Quote: ” Aldrik’s face was dumbstruck. He hadn’t even noticed, or didn’t care, that his jaw had fallen loose”.

Would I? Reread this book? YES. Would I tell others to read it? YES!! Would I buy the whole lot of them for a friend? HECK YES!

Summary: A library apprentice, a sorcerer prince, and an unbreakable magic bond…

The Solaris Empire is one conquest away from uniting the continent, and the rare elemental magic sleeping in seventeen-year-old library apprentice Vhalla Yarl could shift the tides of war.

Vhalla has always been taught to fear the Tower of Sorcerers, a mysterious magic society, and has been happy in her quiet world of books. But after she unknowingly saves the life of one of the most powerful sorcerers of them all—the Crown Prince Aldrik—she finds herself enticed into his world. Now she must decide her future: Embrace her sorcery and leave the life she’s known, or eradicate her magic and remain as she’s always been. And with powerful forces lurking in the shadows, Vhalla’s indecision could cost her more than she ever imagined.