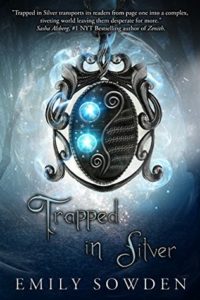 For the first ten chapters I felt like I was reading a completely different book then what I had heard about.  The plot kept changing (which I do like ) but for some reason this book had two speeds, slow, slower and as fast as possible.

And don’t get me started on the main character Ava, I think my biggest problem with her was that she kept changing which is normally a great thing over a span of a couple books and a reason for the change of character. All of which Ava did not have, at one moment she’s strong and doesn’t cry then all of a sudden she cries a lot more and can see the spirits of people who are dead and how they died (which is never mentioned in the beginning of the book). It seemed that Ava was just up and down throughout the whole book, which in turn drove me crazy.

One of the things that I think that this book did not need was the romance added into it, the book already has a lot going on as it is. And if the romance was not as prominent till the second book, I think that might have been better. Because overall I feel like that just took more away from the plot itself.

And I really don’t mean to hate on this book so much, because I did like. It was an okay book over all, and I didn’t love it but the bottom line is that I still liked it.

Would I? Buy this book in print for myself? No, I don’t think so now. Recommend to others? Maybe? Do a reread of the book? Nope, I’m good.

Thank you to Oftomes publishing for sending me this book to read! Given in return is an honest review!

Summary: Courage comes from a shadowed place in our hearts; a blurred line that straddles love and sheer stupidity.
To seventeen-year-old Ava, wild woodcats, hungry stragglers, and simple-minded townsfolk are the evils she’s grown accustomed to. But when Ethan, an unusual man with eyes of smoke and fire opal, enters her world she quickly understands that there are worse things out there than drunken men and carnivorous forest creatures. She’s a specialised liar and a hell of a fighter, but against a group of animalistic men called Berserkers she struggles to survive the encounter as the desperate swing of a dagger is all it takes to change her life for good.
Half-dead and hunted by the Berserker’s leader when he forms a monstrous obsession with her, Ava escapes his pursuit in an unfamiliar land full of impossible creatures, unlikely allies, and the man she doesn’t know whether to kiss or kill.
But after dreadful news of her missing brother surfaces, Ava becomes more involved in the centuries-long war and begins to unravel the reasons behind her relentless nightmares, discovering truths long-buried in a violent history of love, loss and betrayal.