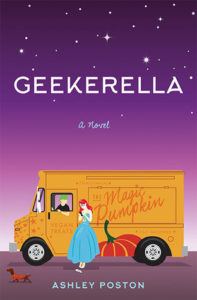 Review: I was so super excited to read this book, but as soon as I did…..

I was a bit let down. Maybe it’s me, I’m not really for the same type of retelling even though this book does have a slight twist to the retelling of Cinderella. It was not enough to woo me to fall in love, just a kind of like with the story and characters.

Toward the end of the book was the best because of the convention feel to it, which I loved. Actually all of the geeky-ness was my favorite in this book. I loved it more then the actual characters, which is a little sad.

Although I was really close to giving this book a five star review the end was the complete tie breaker for me-the two main characters didn’t even know if they were together or not and a whole bunch of other stuff. Mostly this just irritated me because I like a complete ending or at least satisfying one that I can live with.

But overall I did really like the writing style from this author and enjoyed the geeky-ness in a young adult novel because -hey we need it more these days.

“Theres just me, stranded on the wrong side of everything that I love. Like princess Amara, lost in the black nebula.”

“I’m half of my father. Half of my hero. And I am half of my mother. Half soft sighs and sharp edges. and if they can be Carmindor and Amara-then somewhere in my blood and bones I can be too. I’m the lost princess. I’m the villain of my story, and the hero. Part of my mom and part of my dad. I am a fact of the universe. The possible and the impossible. I am not no one.”

I have so many more favorite quotes- just from the author herself that she writes about in the back of the book when doing her acknowledgments, but I’m not going to post them all here and just get of with the review!

Would I? Read this book again? I don’t think so. Recommend to others? Yes, it was a fun book. Buy the final version of this book? Maybe.

Edition: Advance Reading Copy (ARC) given in return for an honest review.   Thank you!!!!

Summary: Anything can happen once upon a con…

When geek girl Elle Wittimer sees a cosplay contest sponsored by the producers of Starfield, she has to enter. First prize is an invitation to the ExcelsiCon Cosplay Ball and a meet-and-greet with the actor slated to play Federation Prince Carmindor in the reboot. Elle’s been scraping together tips from her gig at the Magic Pumpkin food truck behind her stepmother’s back, and winning this contest could be her ticket out once and for all—not to mention a fangirl’s dream come true.

Teen actor Darien Freeman is less than thrilled about this year’s ExcelsiCon. He used to live for conventions, but now they’re nothing but jaw-aching photo sessions and awkward meet-and-greets. Playing Federation Prince Carmindor is all he’s ever wanted, but the diehard Starfield fandom has already dismissed him as just another heartthrob. As ExcelsiCon draws near, closet nerd Darien feels more and more like a fake—until he meets a girl who shows him otherwise.