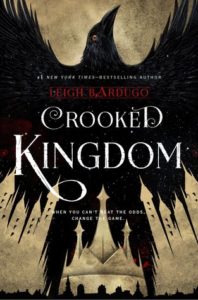 If Six of Crows made you fall in love without you knowing how, why, or when it started. Crooked Kingdom will tear you to bits, leaving bloody trails of destruction in its wake of your heart and soul. All the while you see and feel every point of pain that it gives to you.

Anyway, Crooked Kingdom was an amazing book, full of death, revenge, trickery, and love. And an author who will bask in the glory of your pain.

And if you love these characters watch out! They are all flipping amazing and even better in this book compared to the first. There are also mentions of some past favorite characters from the Grisha series and a bit of stop by for a few.

But in the end it still leaves you wanting more of the Grisha world and its beloved characters.

“His eyes scanned her face as they always had, closely, hungrily, snatching at the details of her like the thief he was-”

“He knew exactly what he intended to leave behind when he was gone. Damage.”

“Go home to Ravka, Nina. Be free, as you were meant to be. be a warrior, as you always have been. just save some mercy for my people. there has to be a Fjerda worth saving. Promise me.”

“They were twin souls, soldiers destined to fight for different sides, to find each other and lose each other too quickly.”

“Somehow he knew that she would be safe, she would find shelter from the cold.”

Would I? Buy this book for everyone I know? Y-E-S!!!!! Would I buy this in audio-book format? YES. Would I tell others to read this series? Hell Yeah!!!

Summary: When you can’t beat the odds, change the game.

Kaz Brekker and his crew have just pulled off a heist so daring even they didn’t think they’d survive. But instead of divvying up a fat reward, they’re right back to fighting for their lives. Double-crossed and badly weakened, the crew is low on resources, allies, and hope. As powerful forces from around the world descend on Ketterdam to root out the secrets of the dangerous drug known as jurda parem, old rivals and new enemies emerge to challenge Kaz’s cunning and test the team’s fragile loyalties. A war will be waged on the city’s dark and twisting streets―a battle for revenge and redemption that will decide the fate of the Grisha world.