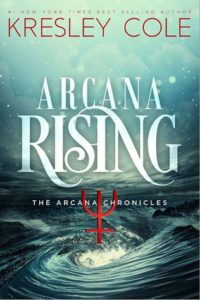 Review: I was wanting to get my hands on this book for so long! I was super happy to finally get it, it barely lasted a day within my grasp.

This book picks up right after Dead of Winter, and it shows a new side to Evie that we have not really seen a lot of before. It for some reason Cole really wants to mess with readers mind and feelings in this book. First with Evie being unable to choose between the two men that love her and want to be with her. Even though she does choose at the end of Dead of Winter, a disaster quickly changes it for her. Cole also shows readers an insight into another of the new characters three person relationship and how far people will go for love.

There are also many new different factors added to Arcana Rising that will throw you for a loop, I know it took me rereading many parts of the book a couple of times to put together some of the pieces. Even the last two big plot twist were hard to understand how they came about and how I felt about them. Even now I’m still not sure what I’m feeling after this book, and very much wanting the next and I think last book in the series.

Favorite Quote: Didn’t really have one.

Would I? Buy this book for others? Yes. Do a reread? Yes. Recommend to others? Yes!

When the battle is done . . .
The Emperor unleashes hell and annihilates an army, jeopardizing the future of mankind–but Circe strikes back. The epic clash between them devastates the Arcana world and nearly kills Evie, separating her from her allies.

And all hope is lost . . .
With Aric missing and no sign that Jack and Selena escaped Richter’s reach, Evie turns more and more to the darkness lurking inside her. Two Arcana emerge as game changers: one who could be her salvation, the other her worst nightmare.

Vengeance becomes everything.
To take on Richter, Evie must reunite with Death and mend their broken bond. But as she learns more about her role in the future–and her chilling past–will she become a monster like the Emperor? Or can Evie and her allies rise up from Richter’s ashes, stronger than ever before?