Wicked Charming (Wicked Ever After #1) By Nazarea Andrews 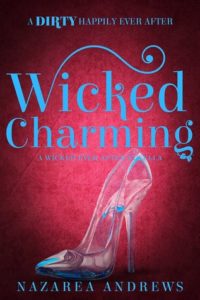 Review: Once I heard about this book/ the Wicked Ever After series, I was very interested in reading more. Each summery for the three books sounded really good to me and I could not get the idea of getting my hands on these books out of my head.

I was chosen to read and review this first book “Wicked Charming” by Andrews, and I was super stoked. But sadly after reading three chapters of the book, I still found myself liking it less and less. It felt like the relationship between Charm and Celeste was too forced and rushed. I know that these three novels are short because their novella’s, but there was not enough background information for this kind of story. It did feel like the author expected me to know all about Charm, his friends, why they are the way they are, and the terminologies for the Beds.

One of the other things that bugged me was almost everyone against Charm wanting to enter into a Dom and Sub relationship with Celeste, which also turns into a romantic one too. Because I do get that her begin a bartender (a lower class then Charm), but for a Dom/Sub relationship I don’t think that should matter. Then there was the whole thing about Charm fighting with himself about how he cant bring a girl like her (a bartender) to meet his parents (by being his fake stable girlfriend), because of her class and because he met her at a sex club he helps run. To me I think him owning a sex club and spending all his time their would be a thing that you would not bring up to your parents, but hey maybe that’s just me.

Anyway there were a few moments that I did enjoy, such as the author tying in a couple of small details from the fairy tail classic. Like names for the characters, the club and adding in GusGus.

Favorite Quote: I did not have one.

Disclaimer: I received this E-book in return for an honest review. Thank you for the book!

He’s at the top of the world.
He’s rich, sought after, and in control.
And he’s bored.
A string of one-night stands have left Samul Charming increasingly dissatisfied. When his mother pushes him to settle down, his best friends come up with a brilliant plan:
Audition the submissive at The Kingdom.
The problem is, Charm knows who he wants: the only girl to challenge him, while submitting as naturally as breathing.
But he can’t have her.
With the entire club watching and his parents expecting him to settle down, Charm decides to settle.
But love in the Kingdom is never simple and it is never painless.
And Charm is about to be reminded of that.