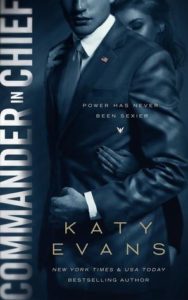 Review: I’m not really sure where to start this review, its been a while and I’m a bit sleep deprived at the moment…. Anyway on with the review!!!!

While reading through this second and final installment to the White House series, I felt that by the middle of the book the characters finally figured out what they were doing and what they wanted to be. Because through most of the first book and the first bit of Commander and Chief both characters were driving me nuts. They seemed very flip floppy about what they wanted to do (in this case only Charlotte), but in the case of the relationship between Charlotte and Matthew, Matthew was bugging me. Because in the first book he was all about not having a Girlfriend/ Wife/ Lover while he was in the White House. That the only women for him was his Country, and his first priority because if he had any kind of woman in his life, he would feel terrible about not being with her and making her be second in everything that came to the Country.

Although I could see what Evans was trying to do but making it seem that Charlotte and Matthew just had this super sexual tension/ amazing love that goes against and beats the odds. It falls a little short compared to her other books, Cough* THE REAL SERIES* Cough. Though the romance and happy ever after for Charlotte and Matthew in the White House was very Kennedy and way better was a very nice day dream away from the U.S. future President that starts this year (Sorry for getting politic there, I promise it wont happen again. Like ever here on the blog).

Overall with Charlotte and Matthew in this book, it felt like they had grown as people ( characters) in to a stronger storyline, along with romance.

Would I? Buy this book in physical format? Yes, just to have all the Katy Evans books. Would I buy this series for a friend? I don’t think so. Would I recommend this series to another person? Yes, but only based on what they might like.

E-book edition. I received this book (ARC) in return for an honest review.

We fell in love during the campaign.
The stakes were high.
Reputations could have been ruined.
Scandal hovered over us like a cloud.
Now the man I love is the President of the United States of America.
And its not my vote he is after.
He wants it all.
My heart. My body. My soul.
He wants me by his side.
In the White House.
Normalcy will be gone from my life, privacy forgotten.
I am only twenty three. I just wanted to play a part in history. But it seems like history wasn’t done with me. The part where I lost my heart to Matthew Hamilton? It was only the beginning…