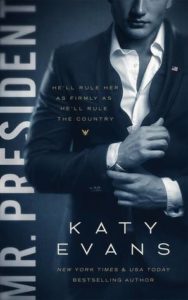 Review: When I first started reading this I was a bit unsure on if I would like it, or if it might be bad. I was mostly this way the first half of the book, because I love Katy Evans books/ her words/ everything. And I really wanted to like this, but at the same time it was not wow-ing me.
Evans has a way with words, she is able to pull you into her worlds and suck you into her characters. Even though this book had a bit of a rough start at first, with some jumps in plot and a few things that didn’t make that much sense. It did start to pick up without me relishing it and by the last page I was dying to know what happens next. Matt Hamilton is really a great character, I wish we did have someone like him running in this election as a third party too!
I am still a bit awed by how this book pulled me in and how fast and easy it was to read. Although Mr. President does not have that punch in the gut feeling that Katy Evans Real series had ( in just about every book). It still leaves you gasping and wanting to know what is going to happen to the characters and if Matt is going to win the election. And if Charlotte and him will be able to figure things out or if they will have to give each other up.
I am so happy to have read this book and look forward to get the rest of the series in the future, because lets face  it I need to know what happens NEXT!!!!!
Favorite quote:
“One day I’ll do all the things I need to. And she’ll be mine. Mark my words.”
“Does she know this yet?” I ask quietly.
“I just told her,” he says.
Would I? Buy this book for others? Maybe. Read the next book in the series? YES, I need to know what happens next! Lastly would I recommend this book/ series to others? YES.
I received this book in return for an honest review. Thank you for the ARC!
Rating: 4 out of 5 stars.
New adult. Romance. Contemporary. Adult. Politics.
Expected publication: October 31st 2016

He’s won the hearts of millions. But is he willing to lose his?

I met the president’s son when we were both young. Matthew Hamilton was handsome, polished, and intelligent. I’d never met a guy like him.

He promised me that he’d never run for president. I promised that if he did, I’d be by his side.

Three terms later, an invitation to join Matthew Hamilton’s campaign is the most exhilarating opportunity I’ve ever experienced. I’m determined to make a difference; he is determined to win.

Focused on his goal, Matt is steadfast, ruthless, and disarming. All eyes are on him and his popularity is surging. But soon, the next possible president of the United States is possessing me in more ways than one—and despite the risks, I’m helpless to resist.

We’re stealing touches, stealing moments, and stealing away at night. But our chemical connection is quickly becoming dangerously combustive, putting not only my heart, but Matt’s chance at the presidency on the line.

Winning will take everything. Walking away will be the hardest thing of all.