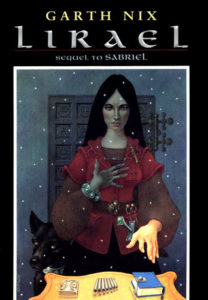 Review: I have not felt in the mood to read this next book of the Abhosen series for  almost a year now. I think it has to do with me being outside a lot more and thinking about what was going to happen next. It was just always there in the back of my mind bugging me and pushing me to read more. So I finally did it, I read Lirael and am now thinking of starting the next book this week. Even though I have five other books that I should be reading.

Starting Lirael was a bit hard just because it has been so long and because it was many years later in the book and new characters. But once the story took off I could barely stop myself from being consumed by this book.

Lirael was a great character and was like your typical young women trying to find her place in life. She and her story were more then they seemed at first glance, which is not surprising coming from Nix.

The end of this book demands for you to read the third book in the series at once, because lets face it. It will linger and grow till it takes over your thoughts. This is a little how I’m feeling at the moment.

So now I must go read Abhosen at once.

Favorite quote: “looking for you, said the cat. As should be startling obvious to even the most dull-witted prince.” -Mogget

Woud I? Recommend this to everyone? Maybe. Would I tell everyone I know to read this series? YES!!!! Would I re-read this book again? Maybe…

Summary: WHO IS LIRAEL?

Lirael has never felt like a true daughter of the Clayr. Now, two years past the time when she should have received the Sight that is the Clayr’s birthright, she feels alone, abandoned, unsure of who she is. Nevertheless, the fate of the Old Kingdom lies in her hands. With only her faithful companion, the Disreputable Dog, Lirael must undertake a desperate mission under the growing shadow of an ancient evil.

In this sequel to SABRIEL, winner of the Aurealis Award for Excellence in Australian Science Fiction, Garth Nix weaves a spellbinding tale of discovery, destiny, and danger.