Simon Vs. The Homo Sapiens Agenda by Becky Albertalli 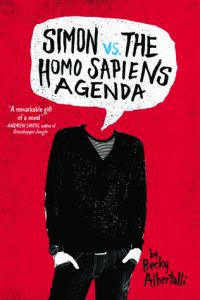 Review: Man, I don’t even know where to start off this review! The book was so incredibly good, that I just don’t have the right words to describe how much I love this book.

Simon is one of the best main characters ever! I mean he is so down to earth, he is like any other person in how he talks. Which made the book even easier to relate too. And I thought I might not like the book at first, but after that first page I could not put this book down. I kept reading through dinner and whenever I had to get up and go around the house. I was really sad when I had finished the book and had to put it down, and return it back to the library. When I was only half way through I started taking pictures of the book and sending it to as many of my friends as I could think of for them to go and get the book to read. And I don’t really do that, well not the sending pictures part.

Anyway back to the plot and characters…

This plot could not have been any sweeter, what with the cute boys trying to get each others attention and the loyalty from friends. Yup, I’m lame I fell so in love with this book and Simon ad his struggles about coming out and finding his mysterious pen pal Blue! Gah, this book man, I can’t even.

Summary: Sixteen-year-old and not-so-openly gay Simon Spier prefers to save his drama for the school musical. But when an email falls into the wrong hands, his secret is at risk of being thrust into the spotlight. Now Simon is actually being blackmailed: if he doesn’t play wingman for class clown Martin, his sexual identity will become everyone’s business. Worse, the privacy of Blue, the pen name of the boy he’s been emailing, will be compromised.

With some messy dynamics emerging in his once tight-knit group of friends, and his email correspondence with Blue growing more flirtatious every day, Simon’s junior year has suddenly gotten all kinds of complicated. Now, change-averse Simon has to find a way to step out of his comfort zone before he’s pushed out—without alienating his friends, compromising himself, or fumbling a shot at happiness with the most confusing, adorable guy he’s never met.