One of the Guy by Lisa Aldin 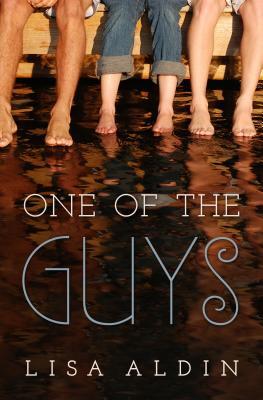 Review: I so enjoyed One of the guys, because like Toni I don’t like to wear skirts either.

It has been so long since I have read a good tomboy book, and I’m happy to have had the chance to read Toni’s story.

Toni or Micrib ( coolest nickname ever)  as she is also called is a great main  character, she is fun, she believes that there is a monster in the local lake, and she see’s herself as one of the guys. To which I can totally relate too. This is one of the big reasons why I like Toni so much, other than the fact that she has a awesome belch.

The other guys in Toni’s circle are cool too along with her new friend Emma, who in fact is a hoot.

The idea for “Toni Valentine’s Rent-A-Gent Service” is great for the plot and characters, because it really has not been done before  ( that I have read) in a young adult novel. Which makes the book even better.

The ending was also pretty good, it leaves you with no lingering questions or thoughts other than thoughts about Champ.

E-book ARC from the publishers in return for an honest review.

Summary: Tomboy to the core, Toni Valentine understands guys. She’ll take horror movies, monster hunts and burping contests over manicures. So Toni is horrified when she’s sent to the Winston Academy for Girls, where she has to wear a skirt and learn to be a lady while the guys move on without her.

Then Toni meets Emma Elizabeth, a girl at school with boy troubles, and she volunteers one of her friends as a pretend date. Word spreads of Toni’s connections with boys, and she discovers that her new wealthy female classmates will pay big money for fake dates. Looking for a way to connect her old best friends with her new life at school, Toni and Emma start up Toni Valentine’s Rent-A-Gent Service.

But the business meets a scandal when Toni falls for one of her friends–the same guy who happens to be the most sought-after date. With everything she’s built on the line, Toni has to decide if she wants to save the business and her old life, or let go of being one of the guys for a chance at love. -Summary from GoodReads.com